Someone feels threatened by the Internet, and the person who threatens them is you

Is there no tyrant but the crowned one?

At the time I am writing this post, I have nearly finished reading Glenn Greenwald’s 2014 book No Place to Hide. 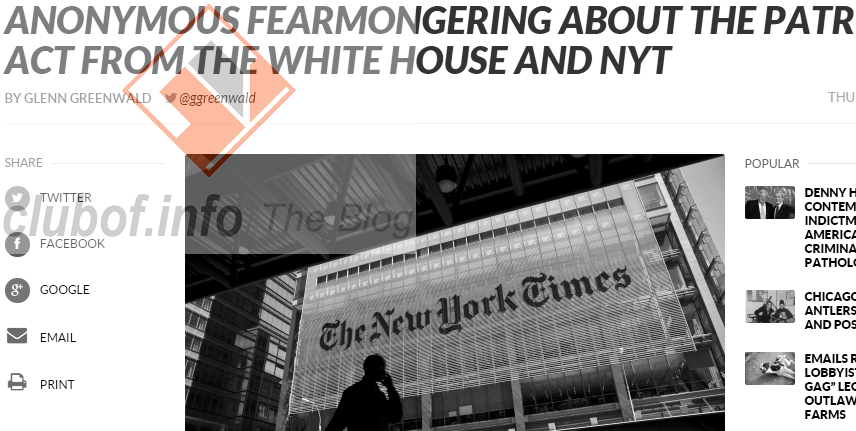 I have opted to avoid publishing a single, official review of the book in favor of writing a number of articles and posts at this blog that shall take the brilliant book as a key source of inspiration. The book is a compelling call to action that coincides almost exactly with the most basic message of Julian Assange and WikiLeaks: privacy for the powerless and transparency for the powerful. A great deal of the book’s message runs parallel to the 2012 book Cypherpunks. Nothing did more to strengthen this philosophy of protecting the common man from an ever-expanding surveillance state than the actions of the world’s most famous whistleblower and possibly the most admired man alive in the world today, Edward Snowden.

The part of the book that I found most agreeable so far, and that I would like to be the focus of this post, is as follows.

The Internet has long been heralded as an unprecedented instrument of democratization and liberalization, even emancipation.  But in the eyes of the US government, this global network and other types of communications technology threaten to undermine American power. Viewed from this perspective, the NSA’s ambition to “collect it all” at last becomes coherent. It is vital that the NSA monitor all parts of the Internet and any other means of communication, so that none can escape US government control.

I would like my readers to consider this claim, and the implications it has for the false narrative being perpetually broadcast in the media that the US is supporting democratization and is the heart of innovation, the home of humanity’s noblest aspirations. As I have always argued, the US government is intent on stifling innovation and stifling freedom, subverting and sabotaging the technologies that could have offered these gifts to mankind.

Why doesn't the US just carpet-bomb ISIL and get it over with?
archives most recent
More from Beliefnet and our partners
previous posts