Saudi Arabia’s trail of foolishness, hypocrisy and mistakes from Syria to Yemen

Men of war are the scourge of the world.

The Saudis and their allies are usually a puzzle when it comes to foreign policy. In their reaction to events in Yemen, they just look like bumbling fools. 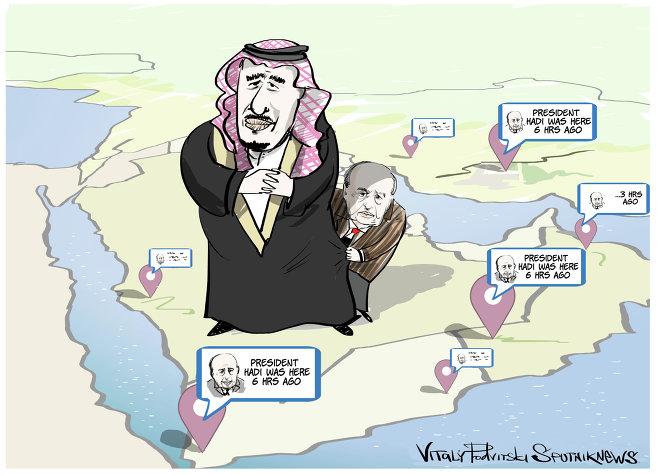 The cartoon from Sputnik News mocking former Yemeni President Hadi, who is cowering in the Saudi capital Riyadh

After the Saudis and their allies spent multiple years pushing and pushing earnestly to bring down Bashar al Assad’s regime in Syria, he is still in power and stronger than ever, gaining an increasing advantage over the Saudi-backed insurgents. Even as the Saudis meddled in Syria (and even Iraq and Lebanon, according to some reports on their relationship with ISIS), their own walls have started to fall down on them, with the pro-Saudi government of former president Hadi in Yemen collapsing. In other words, the plan that Saudi Arabia wrote for Iraq, Lebanon and Syria has happened to Yemen and destroyed one of Saudi Arabia’s own friends.

Most amusing is the fact that the Saudis and their ideologues in the Arabic media are convinced that Iran is behind the fall of the Yemeni government and the success of the Houthi Movement’s Ansarullah paramilitary wing, effectively “taking over” Yemen. However, as reported in an analysis at Stratfor, Iran is simply too far away to really have any meaningful involvement in the conflict in Yemen. There is no evidence that Iran has provided any money, training or weapons to any of the parties fighting in Yemen. However, Iran’s alleged disrespect for Yemen’s “sovereignty” (according to Hadi and his Saudi freinds, that is something to be determined by foreign armies and planes rather than the Yemeni people) is argued to be the reason for the violent campaign now being waged against Yemen.

Saudi Arabia, unlike Iran, has been bombing the factions it disagrees with in Yemen, killing hundreds of civilian bystanders, and has been airdropping weapons to the groups it wants to kill its enemies in the country. In sum, Saudi Arabia wants you to think some kind of invisible, unproven specter of Iranian connections in the sovereign country of Yemen is an “aggression”; lunatics like US Senator John McCain (see his remarks at the Munich Security Conference) and other anti-Iran maniacs also see Iranian influence in Yemen as aggression… but Saudi Arabia’s blatant airstrikes and airdrops of guns into the country are seen as necessary countermeasures to protect Yemen’s “sovereignty” from Iran.

In reality, Iran has not done anything hostile in Yemen, while Saudi Arabia has committed acts of blatant aggression and is sending weapons to factions in the country.

Former president Hadi and the so-called Syrian opposition are  not legitimate rulers of anything, but they do have one striking similarity: both are cowering in foreign capitals and suckling on foreign promises, while pretending to rule over their respective countries and denying that their people have rejected them. Cowering in Riyadh is what passes for being a “legitimate” ruler for Yemen in the eyes of Riyadh.

A pluralistic or secular constitution doesn't attack a religion, but protects them all
archives most recent
More from Beliefnet and our partners
previous posts