All oppression creates a state of war. 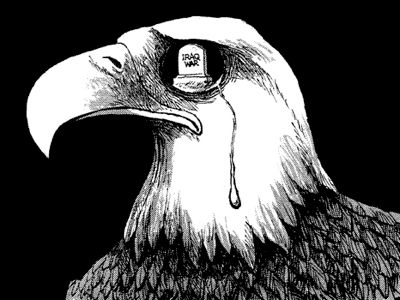 The US, like the UK’s Conservative government, clings to an outdated adversarial worldview based on the old-fashioned wartime alliances of the Twentieth Century and a policy of aggressive intervention into the affairs of foreign countries. A negative and paranoid perception of the world pervades the US establishment, detached from the complex realities of the Twenty-First Century, and it is reflected in their cliché-ridden reaction to the prospect of Scotland securing its future as an independent country in the referendum that will take place on 18 September.

BBC wanted me on TV re: Scotland. But they couldn’t find a single member of Congress to take pro Independence side, not one out of 535.

The US position on Scotland’s internal matters has, since August , been as typically meddling and arrogant as the rest of US foreign policy:

…this relationship between the United States and the United Kingdom is based on shared values of democracy, individual freedom, and the rule of law;

… British statesman Winston Churchill in 1946 labeled the relationship between the United States and the United Kingdom the Special Relationship because of the unprecedented depth of cooperation and the extensive historic ties between the two nations;

… throughout the 20th and early 21st centuries, the United States and the United Kingdom fought together in several struggles, including the First and Second World Wars, in which millions of American and British soldiers sacrificed for their countries;

I have illuminated the parts of the US House of Representatives’ Resolution 713 that confirm they are stuck in the past and appear to be oblivious to modern developments that have contributed to the Scottish people seeking independence.

First, the US should not talking about what the United Kingdom wants, but what Scotland wants, and the claim about shared values of democracy, individual freedom and the rule of law is absurd and irrelevant even if there was any truth to it other than blatant, Cold War-minded US propaganda. Right now, the US regime cannot even agree upon its own internal model of democracy, individual freedom and the rule of law, as has been proven by its flagrant abuses of power, detentions, torture and domestic spying born out of its fear of its own people. Mirrored by the UK like a puppet state, such practices are hardly part of any model that the Scottish people would like to follow.

Second, the “special relationship” has no real popular resonance, either for the US or the UK – except among establishment cronies in both countries. Not only is Winston Churchill’s claim anchored in a bygone era when the world was divided into rival alliance structures, but the US doesn’t even believe in the special relationship anymore itself. If it did, why does it feel the need to aggressively monitor its supposed closest ally, which is a huge violation of trust, or make interfering declarations like Resolution 713 itself regarding the internal affairs of its supposed closest ally? In addition to this, what about the European Union? Isn’t that special relationship more important to Scotland’s future than some outdated alliance that was needed to defeat the long-dead Nazis? If the threat is from Russia, isn’t the EU  a better place to start cultivating alliances rather than teaming up with reckless US aggressors and adventurists, who are entirely detached from European interests? Don’t the core interests of Scotland coincide more with a united Europe than with the dated US-UK “special relationship”?

In the Resolution’s declarations, the House of Representatives:

(1) believes that a united, secure, and prosperous United Kingdom is important for U.S. national security priorities in Europe and around the world;

(2) believes that diplomatic, economic, and military cooperation between the United States and the United Kingdom in bilateral, trans-Atlantic, and global arenas is essential to the national security of the United States;

This is perhaps the biggest blunder of this resolution. It puts US national security interests above the interests of the Scottish people, which tells us everything that is wrong about the “special relationship”. The “special relationship” has never been about the interests of real people on this island, but about how the people of this island can be misguided into serving US interests. Think of the conflicts and crises that have taken place since the Second World War: In every instance, the US tried to equate its own over-inflated ambitions with the UK’s, while giving back nothing to the UK. In no instance did the US take any significant steps in the interests of the UK as its power shrank, and in every case the US tried to enlist the UK’s support to protect the US from harm or help the US attain more power. The US uses the people of this island as a human shield for its own greedy global ambitions, and its panic over the drive of Scots towards securing their independence from imperial domination by London is the result of the an even more selfish desire to subordinate the interests of more human beings to the interests of the US empire and its cronies in Westminster.

All that the US has done by issuing this dull and uninspiring resolution is feed the Scottish people with more hope that they will be able to govern themselves better, including gaining a more independent and representative foreign policy. The US Empire will be weakened by Scottish independence, and that is yet one more reason to vote Yes on the 18th. 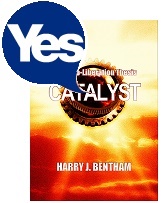 In support of this referendum, so world-shaking it has hit the halls of arrogance in Washington, I’m creating a new book deal. UK customers will be able to get Catalyst: A Techno-Liberation Thesis (2013), at a discounted price from September 15 to September 18 – starting at an 84% discount on September 15 and ending at the original price on September 18 when the referendum takes place.

Defining stories: my own star wars
archives most recent
More from Beliefnet and our partners
previous posts