Is President Obama or Mitt Romney ‘The Bad Guy’? : Talking With Kids About Politics

On Sunday, Chuck and I tend to watch Face The Nation and The McLaughlin Group. Caidin is usually sitting nearby playing with his toys or reading. From time to time he will ask us a question about something someone has said, but in general he doesn’t appear to be paying attention.

The other night Caidin said something to me before he went to bed. I don’t remember exactly what it was, but he was upset that people were saying that President Obama was a ‘bad guy’ and he was angry with Mitt Romney. I explained to Caidin that winning in politics often comes down to pitting one side against the other, about creating a sense of loyalty and allegiance to both a message and to a  party and that in order to do that, both sides makes the other out to be a ‘bad guy’.

I went on to further explain to Caidin, that the need to have a ‘bad guy’ to fight against isn’t anything new. It’s present in mythology, in literature and throughout history. It’s even present in how we unconsciously learn our life lessons. We need something to push against, we need someone or something to be the ‘Big Bad’.

Our opportunity as conscious beings, not just as conscious parents, is to remove ourselves from this push/pull energy and refuse to engage it. To rather look at what we are trying to learn and understand it, learn it, heal it and evolve.

I explained to Caidin that when it comes to politics, you need to learn to filter out all the noise and exaggeration. You need to be able to identify tactics used to get you angry or to get you focused on something other than what really matters. You need to look at the facts, not the spin and the manufactured fiction. You need to do your own research into the candidates, rather than take someone else’s word.

But how many of us really want to take that much time to figure out what is going on, who these people are and how their philosophies will affect us individually and as a whole?

Having the right to vote is actually a huge responsibility.

I saw this sign the other day that read ‘Hey 1%, we’re the 99% and we just woke up.’ And it’s true, so many of us have been sleeping our way through life, accepting what we are told by the government, by political parties, by corporations and by the media.

And for me, I already learned that Caidin is always paying attention. 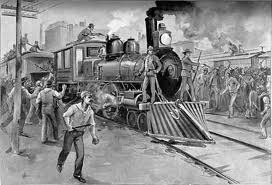