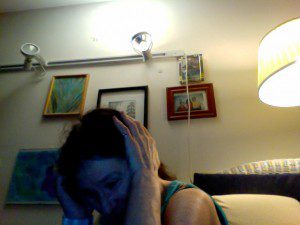 Criicism seems to be a natural part of life. There are many people who think they’re helping you by poining out that you’ve gained a few pounds, or you’re not doing a good job ast something, or your clohing doesn’t suit you, or you need a haircut or a gazilliion other criticisms. Getting criticized can make you angry, hurt, insecure, resentful and a lot more emotions that don’t feel good. Next time someone points out that something is wrong with you, ask yourself:

•    How do I feel about what’s being said? Don’t ignore your feelings or they’ll build up inside and stay with you for a long time. It’s easier to deal with your feelings fast.

•    Do I agree? If you think you look fine, or are doing a good job, smile and say something like, “I’m happy with how I look/my work, and I’m not looking for a reason to feel bad so I don’t need your input.” Say it nicely with as smile. That should shut them up!

•    What can I learn from the criticism? Often the words target something that bothers you and can motivate you to change it.When a boyfriend criticized my cluttered closets, I balked but afterwards I recognized I didn’t like the clutter . so I cleaned them out and felt good about it . Although criticism can be painful, but it can help you if you look for the lesson in it.

•    Is this person really trying to help me?  There’s a big difference between constructive criticism from someone who sincerely cares about you and being trashed by someone who is out to hurt you or feel better about themselves at your expense. If it’s the latter type of person, speak up or let it go. Figure out the best choice for yourself and ignore the critic.

•    How can I set boundaries with regular critics? Come up with some things to say to he people who often try to knock you down with by pointing out your imperfections. You’re entitled to protect your self-esteem by creating boundaries. Express how you feel when you’re hit with criticism. Nicely, and firmly tell the critic what you’ll do if it happens again, such as leave the room, hang up the phone, or, if it’s serious enough, end your relationship altogether. It’s important to show you mean it by doing it.

Criticism only hurts you if you allow it to. People have their own issues that make them find fault in others. They may do it because they’re insecure and putting you down makes them feel better. Sometimes people who are jealous and will find something to pick on. Don’t take it personally. Their own issues are behind their words.