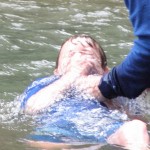 My youngest son was baptized recently. I had the honor of dipping his little shaggy head under the river that runs near our home. It wasn’t quite like my own baptism, however. When I was his age, however, I was terrified of water. I didn’t learn to swim until I was an adult, so commanded by Jesus or not, there was no way I was going to put myself in a situation where I might drown, and in my effort to please Jesus, meet him face to face.

Therefore, I was the first person in my church and immediate family to be baptized in an indoor baptistery. We borrowed the sanctuary of another church for the event, and most of the old-timers were sure it was an act of high sacrilege.

By the time I became a pastor outdoor baptisms were anomalies. Every church, except for a few hold outs, had indoor dunking pools. In just such a pool I once baptized six little kids after summer Vacation Bible School. The third one into the water was a blond-headed boy named Vince, who was always getting into trouble. Baptism didn’t stop that. No sooner had he left the pool, and I turned to guide the next baptismal candidate into the water, from behind me, he cannon-balled back into the water and was doing the backstroke before we fished him out.

And there was a young man named John who made a profession of Christian faith and, of course, needed to be baptized. John was more than six feet tall and about three-hundred pounds. He worked as a carpenter and was a mountain of muscle. And here I was, all 170 pounds of me with arms of ribbon and in a denomination that insisted on dipping a candidate below the water – completely below the water. If there was ever a time I wanted to be a Methodist that was it.

I went to an old Baptist preacher I trusted and asked for advice: “How do I get this big guy back up, out of the water,” I asked him. He answered, “Get him up? Don’t worry about that. Just get him down. He’ll get up.” Thank God he did.

What is the meaning of baptism? It depends upon who you ask. Some say it is a sacrament. The pastor who dipped me in the water would say it is “only” a symbol. And then, if you could answer that question, how do you baptize properly? Do you pour, sprinkle, immerse, dip, spray, squirt, squeegee, soak, or flush? Again, it depends upon who you ask. Modes and means of baptism are as diverse as Christianity itself.

I understand baptism as neither a sacrament nor a symbol. I think it is a sign – a “pointer” Karl Barth might call it – aiming at something else. That something else is nothing less than a new humanity, a new creation God is bringing to his world through his Son, Jesus. More than anything else, I believe baptism is our statement of faith that a new future is coming, a new creation, and it states our willingness to be a part of that new world today. I believe baptism communicates to all onlookers that we have entered God’s radical, grace-filled, barrier-breaking community, and there is a different way to live in this world.