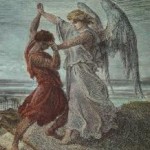 His name was Jacob, and he lived up to his name. “Jacob” means “heel grabber,” or “one who causes others to stumble.” Not very flattering.

Today we might use words like trickster, swindler, shyster, or con-artist. Jacob was the kind of guy who always found a way, through an abundance of guts or a lack of conscience, to get what he wanted.

And what he wanted most was his brother’s birthright. Birthright? What is that? Well, in biblical days it was the unique inheritance intended for the firstborn son, which Jacob was not. But he got it nonetheless.

In the ancient world, stealing a birthright was equivalent to forging the will, defaming the family name, stealing your brother’s wife, and selling off stock with insider information all in one. His brother was none to happy about all this. Jacob had to leave home to save his neck.

Then, two decades later, the Heel Grabber had to return home to face the music. His brother Esau, with an army of 400 men and a twenty-year grudge, rode out to meet him.

On the night before their historic meeting Jacob chose to spend the night alone in camp thinking about what may or may not happen in the morning. Alone, ashamed, and afraid: There is no better moment for an encounter with God. And that is exactly what happened.

God himself came out of the night and engaged Jacob in an epic wrestling match. This manipulative, cheating, deceptive little swindler had finally met his match: God in wrestling tights.

All night long the two battled, neither one prevailing. Until daybreak, when with just a touch of his hand, the stranger in the dark dislocated Jacob’s hip and said, “That’s enough.  Let me go.”

God had allowed Jacob to scrap and scramble until he was completely exhausted. At the end of himself, Jacob had no tricks left in his bag. He had no strength to seize the things he wanted, no imagination or deception remaining to take what didn’t belong to him. The one who had always found a way to win, had no where left to turn.

And yet, he had something left: Exhausted, defeated, weeping, and crippled, he collapsed to the ground, hanging on to the ankles of God like a drowning man. The Heel Grabber laid hold of the heel of the Maker of the universe, and asked for what he couldn’t get on his own: A divine blessing.

Jacob’s audacity is without limit. The man who had stolen his dim-witted brother’s birthright, who had deceived his blind and dying father, who had played on the vulnerable emotions of his mother, who had out-waited and outfoxed everyone he crossed paths with –  wants more.

He wants the favor of God. It is preposterous. But Jacob’s wish is not the most outrageous part of the story. That part of tale belongs to God, because God, inconceivably, grants the request (See Genesis 32).

If we leave Jacob in a foreign land, suffering with his deceptions and sins, crippled by God, on the run from his brother to save his life, then that would be fair. “See, he got what he deserved,” we would all cry, and use it as a lesson to teach our children to behave.

But not here. Jacob doesn’t get what he deserves, he gets grace instead. He gets the one thing he has been after his whole life: God’s blessing. But it came only through exhausted surrender.

In the end God speaks to Jacob and says, “You will no longer be called Jacob. You have wrestled with God and prevailed. Your name is nowIsrael.” And with that, this known pariah became the namesake of the people of God.

To this day, every time we call the nation ofIsrael’s name, we recall a man sleepy and stumbling, limping across the river into the Promised Land, transformed by the power of God.

To wrestle with God is to face the truth we have refused to admit about ourselves. Our self-reliance, our unyielding captain of our fate attitudes: these will take us a long way in this world, but these will never bring us into the favor of God.

Maybe it is better to be wounded, even crippled by a wrestling match with God, than to retain our false sense of wholeness and our failing attempts at self-reliance. 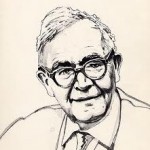 Jesus Loves Me This I Know...
archives most recent
More from Beliefnet and our partners
previous posts