It “Resonates, Percolates and Unsettles” 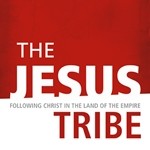 A new book is a treasure to hold.

As a writer and a prolific reader, new books generally don’t stay new very long if they’re within my reach. Also, unless borrowed from the library, a new book will quickly take on a second persona, that of a coloring book as key statements or quotes are highlighted with whatever color pen I’m clicking with my right hand as I read.

The latest treasure to cross my desk is “The Jesus Tribe” by Ronnie McBrayer, carrying the subtitle “Following Christ in the Land of the Empire.” It has a veritable rainbow of colors on the inside pages, and the newness of the book and its message continues to simultaneously resonate, percolate and unsettle. McBrayer, whose weekly column “Keeping the Faith” appears on these pages every Friday, gently, but inexorably leads his readers to a clearer understanding of what it means to be a citizen of the Kingdom of God while living in an earthly empire. In doing so, he turns American Christianity sideways and that’s where the going gets tough in reading, and reporting on the book.

Early in the introductory chapter, McBrayer acknowledges that the contents of his book may be hazardous to the health of red, white and blue bunting Christians. He writes, “We operate under the notion that America actually belongs to us Christians and that we belong to it. We believe the church and the state can make beautiful music together if only they would cooperate.

“We believe the lie of the Serpent that we can hold to the sacrificial, life-giving, peace-pursuing, cheek-turning way of Christ and hold to the poisonous, domineering, power-hungry, least-of-these-abusing systems of the Empire.” McBrayer, never straying from the teachings of Jesus known as the Sermon on the Mount, found in Matthew chapters five through seven, and using illustrations from his own life, the lives of his Cherokee ancestors and the likes of Dietrich Bonhoeffer and G.K. Chesterton, challenges the reader with statements like: “But we must do business with this man Jesus and realize that either (1) Jesus did not mean what he said, (2) he did not say what he meant, or (3) he actually said what he meant and meant what he said.”

In the chapter titled “Gotta Serve Somebody,” he identifies one of the greatest dangers to the church in America, writing, “The temptation before the church will always be the same: we will be invited to join in a way of life or participate in a story that is not ours; to dance to a tune our Lord did not compose; to adapt to the rules and reality of the world, not the rule and reality of Jesus; to pursue the American dream and not the dream of God’s now present and still coming kingdom.”

In order to pursue the dream of God’s now present and coming kingdom, McBrayer identifies how followers of “The Way” (the term used by the earliest followers of Christ), can do so today, even in the midst of a culture that alternately waves the Red, White and Blue and thumps the Bible — if not with their fists, then over the heads of those who oppose their favorite precept or embrace their self-proclaimed Cardinal Sin. McBrayer makes clear the distinction between judgement and discernment; challenges the “just war” concept; and paints a new and refreshing portrait of what the church could look like if its members looked at and loved others “expecting the very best” of them.

The Jesus Tribe is a treasure trove, not only for believers looking to go deeper into faith, but for those who have spent a lifetime on the outside, looking in, confused by the myriad incongruities found between faith and organized religion.

According to his online biography, McBrayer, a self-proclaimed storyteller, scribbler and seeker, was born in the foothills of the North Georgia Appalachians. He claims he barely survived the fire-and-brimstone, fundamentalist indoctrination of his hard shell Baptist-reared childhood. But in the great comedy of God, Ronnie has spent his adulthood in ministry, both preaching in and protesting against; both loving and leaving; both running away from and returning to the church. The faith he is trying to keep isn’t in organized religion, however. It is in Jesus.

The Jesus Tribe is McBrayer’s third book, joining “Leaving Religion, following Jesus” and “But God meant it for good.” He also has published two collections of his syndicated “Keeping the Faith” columns, volumes one and two.

read next post
"If It's Going To Be...It Won't Be Me"
archives most recent
More from Beliefnet and our partners
previous posts