Have you ever heard of a fellow named Sisyphus? I know. His name sounds like a communicable disease or something like that. But in Greek mythology, Sisyphus was a great king and founder of the ancient city of Corinth. In his day he was an entrepreneur of Trump-like proportions. He presided over his territorial and commercial empire with amazing skill. And like any Wall Street tycoon or mega-corporate CEO, he was cagey and innovative, wealthy and creative. His tactics, however, more resembled those of Tony Soprano than Jack Welch. Sisyphus was a deceptive, murderous, untrustworthy fellow. This was not a man with whom you conducted business with only a handshake. One had better come to the table ready for a fight, or at least protection against getting whacked.

If you read the mythologies about Sisyphus you find him so irritating to the gods that they banished him to hell on at least two or three occasions, depending upon who you read. But he was such a wily character he could even negotiate an escape from the underworld – twice. Nevertheless, his trickery caught up with him as such things always seem to do. For his many treacherous crimes he was condemned to an eternity of frustratingly hard labor. His endless assignment was to roll a huge boulder to the top of a hill, taking all of his strength to do so. Then, every time Sisyphus arrived with his rock at the top of the hill, the thing would roll back down to the bottom. Sisyphus would be forced to begin the process all over again. According to the Greeks, he’s still struggling with that stone today.

In issues of faith many of us lead a Sisyphean existence. We are always pushing that rock up the hill. Proof of our effort is betrayed by words like: “I’ve got to do better. I’ve got to try harder. I need to give more. I need to pray longer. I’m not good enough. I have to read more Bible verses.” Faith becomes a terribly heavy burden to push up the hill. Like Sisyphus eternally pushing his rock, or a hamster on a never ending exercise wheel, we turn liberating grace into a repressive pseudo-holiness that is nothing short of a deathtrap. How foreign is this concept to the spirituality of Jesus? Matthew 11 frames the contrast best. I love Eugene Peterson’s translation of Jesus’ anti-Sisyphean words found there:

“Are you tired? Worn out? Burned out on religion? Come to me. Get away with me and you’ll recover your life. I’ll show you how to take a real rest. I won’t lay anything heavy or ill-fitting on you.”

Quite the disparity, no? Granted, faith and spirituality are not passive. A healthy faith and a vibrant spirituality do not develop spontaneously without some level of decision or intentionality. We have to give these our attention. But too many of us have an overly-inflated sense of personal responsibility. We think that our spiritual journey and growth depends upon all that we can do. Many of us live – or exist rather; we haven’t learned to live – with the old Protestant work ethic hanging around our necks like a yoke.

Boiled down to bumper sticker mantra we think: “If it’s going to be, then it’s up to me.” That’s nothing short of sacrilege, even if it sounds resolute and brave. We proponents of the Christian faith must recapture a healthy spirituality that isn’t so much about labor as it is about resting. It should not be so much about all the work we can do for God, or church, or anyone else. It should be about recovering what it means to be truly alive.

Being a follower of Christ is not about being an adherent to one of the world’s great religions. God save us from enduring any more of that. No, being a follower of Christ is the discipline of being still, and learning to trust the way that leads to life. There will always be another stone to push up a hill, another mile to run, another burden to bear. But faith should not be one of these. Faith, particularly faith in the person of Christ, is not a ball-and-chain, holding us down in a slave’s hell. It is the very means to live a light and free life. 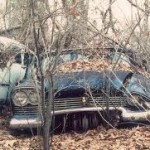