“Help Us Ship the Nuts Out of Georgia” – Remembering Clarence Jordan, Part 2 of 3 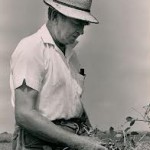 I am speaking this weekend at the Clarence Jordan Symposium at Georgia Southwestern University. It is a celebration and reflection of the life and words of Clarence Jordan who would have turned 100 years old this year. To commemorate this event, and the man who has been more of an influence on me than any other single theologian, I am posting a three part blog on Clarence Jordan. Enjoy, and I hope you come to love this man as I have. – RM

Jesus’ Sermon on the Mount was Clarence’s favorite text. He rightly believed that the Sermon on the Mount was not a high and mighty ideal or a code of laws for some future utopia. Rather, it was a description of how the followers of Christ actually lived. And when professing Christians resisted Jesus’ words, Clarence confronted them – even his own family. Clarence went to his brother Robert, once, who was a lawyer, and asked him to represent Koinonia Farm. Robert said, “Clarence, you know I can’t do that. You know I’m going into politics. If I represented you, I’d lose everything. It’s different for you.”

Clarence asked, “Why’s it different for me? You and I were baptized on the same Sunday when we were boys. The preacher asked us both the same question, ‘Do you accept Jesus Christ as your Lord and Savior?’ I said, ‘Yes.’ What did you say, Robert?”

Robert said, “Clarence, I follow Jesus up to a point. I follow him to the cross, but not on the cross. I am not going to get crucified.”  Robert was later elected a State Senator, and eventually he became a Justice of the Supreme Court of the State of Georgia. Clarence replied to his brother’s comments with, “Then I don’t believe you are a disciple. You’re an admirer of Jesus, but not a disciple. God help us if we are only admirers of Jesus.”

Clarence took Jesus seriously – more so than most people we will ever meet – and it is that example from which we must learn. Clarence understood that those taking Jesus seriously – serious enough to live radical lives would be very few. But he was OK with that. He would describe such people as dynamite in a coil or gasoline compressed by a piston. These were small, constrictive spaces, but it was actually in their smallness that explosive power ignited. So Koinonia became a place like that. It was never very large – no more than a couple dozen people and sometimes down to only the Jordans – but it was explosive in its influence and power. And, it was explosive in the community.

In the 1950s and 1960s, with desegregation and the racism of the Deep South, Clarence Jordan found himself sitting on a powder keg. In 1950 Clarence and members of Koinonia went to church on Sundays at the Rehoboth Baptist Church in Americus. One Sunday, a dark-skinned student from India went to church with Clarence. It caused such a stir that members of the church told Clarence it would be in his best interest not to come back – ever. He, his wife, and all members of Koinonia Farms were excommunicated from the church because they shared living space, worship space and meals with those whose only crime was the color of their skin. But that was just the beginning.

Listen to Clarence’s words to what happened when his community of blacks and whites attempted to visit another church in the community: “So us-all went to that million-dollar church. When we sat down the folks in front of us moved away. The folks back of us moved away. There we were, a little island in the sanctuary. Shortly, the chairman of the hospitality committee came steaming up the aisle, face flushed. Pointing to the Negro fellow he said, ‘He can’t stay here…We just kept singing. So the fellow came around and stood right in front of the young black man, named McGee, and said, ‘Come on, nigger, you gotta get out of here. You are disturbing divine worship!’

“Now, I didn’t know where the divine worship was, but I did know who was disturbing it. The chairman got so infuriated, he lunged over the bench and grabbed McGee and started dragging [him toward the door]. When they got us outside, the deacons formed a big line and stood between us and the door to the sanctuary. The pastor was standing there with them. I turned to him and said, ‘You know, there’s something wrong about tonight, something awfully wrong. On a night when people are singing ‘Glory to God in the highest and on earth, peace’ for a man to be dragged out of the house of God [because of] the color of the skin with which the Almighty endowed him; there’s something wrong.’ The pastor said, ‘Yes, I agree, but this is the policy of our church.’

“I told him, ‘Well, everything is integrated now except the churches and the jails – at least there’s hope for the jails.’”

The local community began a boycott of all the Koinonia’s farming products including their honey, their fruits and vegetables, their pecans and chickens. Their produce stands were firebombed. For nearly a year machine gun fire was sprayed nightly into Koinonia from the highway. Their fields were salted; their pecan trees were cut down; their tractors and farming equipment were destroyed. In February 1957 the Ku Klux Klan held a rally in Americus and then drove to Koinonia, burned a cross and told Clarence that he and the others would be killed if he didn’t sell the farm and leave town. In March of that same year, a Grand Jury began investigating Clarence and Koinonia under the accusation that they were Communists. Jordan responded to the accusation like this: “Sharing my goods with those I live with doesn’t make me a Communist anymore than me being with you makes me a jackass.”

He always had clever slogans like that – including the phrase that saved Koinonia Farms. When it became clear that the farm would be unable to sustain itself selling its goods locally, Clarence began a mail-order pecan business that still thrives today. His marketing slogan was, “Help us ship the nuts out of the Georgia!” And they did by the bushel loads, financially saving the farm. See, while Clarence took Jesus seriously, and there is great wisdom in this, he didn’t take himself too seriously.

“A church in Georgia just set up a big $25,000 granite fountain on its lawn, circulating water to the tune of a thousand gallons a minute. Now that ought to be enough to satisfy any Baptist. But what on earth is a church doing taking God Almighty’s money in a time of great need like this and setting up a little old fountain on its lawn to bubble water around? I was thirsty…and you built me a fountain.”

Once Clarence was given a tour of an immaculately built church by the senior pastor. As they neared the end of the tour and stepped outside, the pastor looked up at the cross on top of the steeple and said, “Dr. Jordan, even that cross up there cost us $10,000.” Clarence responded, “Well buddy you got gypped. There was a time when Christians could get one of those for free.”

To learn more about Clarence and Koinonia Farms, see Briars in the Cotton Patch, directed by my friend Faith Fuller

"A Demonstration Plot" - Remembering Clarence Jordan, Part 1 of 3
archives most recent
More from Beliefnet and our partners
previous posts