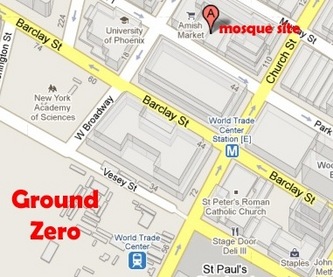 True to form, which means a bit late in the game, President Obama has now weighed in about the mosque and Islamic center to be built two blocks from Ground Zero. The debate is now a culture war — it is not about legality. It is about propriety. One issue not discussed that I have seen is the Christian commitment to forgiveness. Does this fit in this issue for you?

“Let me be clear: as a citizen, and as president, I believe that Muslims have the same right to practice their religion as anyone else in this country,” Obama said at a White House iftar, the traditional breaking of the daily Ramadan fast.

“That includes the right to build a place of worship and a community center on private property in Lower Manhattan, in accordance with local laws and ordinances,” he continued. “This is America, and our commitment to religious freedom must be unshakeable.”…

Obama, who has made repairing strained U.S. relations with the Islamic world a centerpiece of his presidency, had remained silent for months about the nonprofit Cordoba Institute’s proposal to build the Muslim cultural complex — which would include a prayer room, the mosque component of the project, and “a Sept. 11 memorial and contemplation space” — in Lower Manhattan….

Not all agree… more after the jump…

But Dan Senor, a prominent New York Republican who has been a vocal opponent of the project, said Obama’s remarks represented a “missed opportunity.”

“He sets up a straw man, as if the debate were solely about religious freedom,” said Senor, an adjunct senior fellow at the Council on Foreign Relations. “One can respect religious freedom and private property, both of which are protected by the Constitution, and still oppose the plans of the Cordoba Initiative on the grounds they will move New York backward, not forward.”

Senor, who worked for the U.S.-led Coalition Provisional Authority in Baghdad in 2003 and 2004, said Obama “had to weigh in, given the emotions this has stirred.”

“But he could have embraced a defense of freedom of religion, and still called on the project’s leaders to consider whether building it is the right thing to do,” he said.