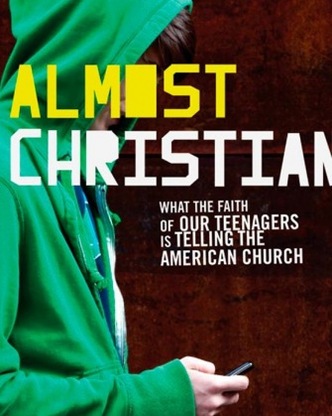 Kenda Dean’s new book is called Almost Christian: What the Faith of Our Teenagers is Telling the American Church

, and in her next chp she examines what makes the Mormons so effective — and she calls the chp “Mormon Envy.”
What can we learn from the Mormons about passing on the faith?
She opens with something I’ve not known about: high school Mormons begin the day at “seminary” where they are taught the scriptures and theology of Mormonism. All this before school — four years, five days a week during the school year. Parents are the teachers. It involves journaling and pragmatics as well.
Her big point is that Mormons top the charts when it comes to integrating their faith as teenagers. 73% hold faith similar to their parents; 43% attend services weekly; 80% talk about religion once a week with parents. Thus: “Mormon youth participate in more religious practices of all kinds, and are much more articulate about church teachings” (51).
And her thesis is that four components, yea five, are involved in their “intense religious socialization”:
First, a creed: they know what they believe and know it well and can defend it.
Second, a community is at the heart of everything Mormon, and their community is more participatory for the youth than other religious traditions.
Third, a calling is important and that means their focus on mission.
Fourth, a hope shapes their behavior now.
Finally, a family-nurtured faith is where it all begins. Families take responsibility for passing on the faith and embodying the faith.
read next post

Let's Get Neanderthal!
archives most recent
More from Beliefnet and our partners
previous posts