One of the more important and more difficult pieces of the puzzle as we feel our way forward at the interface of science and faith is the theological implications of discoveries in modern science. A comment on my post Evolution in the Key of D: Deity or Deism noted:

…this reminds me of why I get annoyed so much by those who write on theology and evolution. It’s usually just deism and fluff, to be frank.

I’ve enjoyed reading through the comments and seeing some of the ideas shared by others. I firmly believe that this discussion on deism vs/compared to theism in natural theology should be given much more attention. Some of the scientist-theologians (Barbour, Polkinghorne come to mind) speak of a “theology of nature” instead of a natural theology, but in my mind, they haven’t really given us a good framework for how God acts in and through nature. It’s important to note that while natural theology is only one component of theology, it’s clearly a vital one today.

Justin developed these thoughts a bit more on his own blog A Biologists View of Science  & Religion.

I think that this is an extremely important issue that should receive
more attention by theologians (especially those that have training or a
fairly deep understanding of evolutionary biology).  The scientists like
me or those at BioLogos have got to admit that our theology of
evolution is weak.  You cannot persuade Christians that evolution is not
the enemy (and literal Creationism is bunk) if you don’t provide them
with a meaningful and understandable natural theology alongside the
scientific evidence.

What kind of discussion do you think we need to develop a workable theological understanding of evolution? What is the most significant issue?

I agree with Justin here. As a result one of the things I intend to do over the next many months is to post on ideas and books that delve into the
details of theology in the context of evolution from a variety of different viewpoints. We will examine different facets of the relationship between science and theology. Some, perhaps all, will fall short in various ways – erring in the understanding of science or wavering on the edge of the trap of deism, removing God too far from creation. This will be something of a meander, don’t expect resolution in three short lessons or seven easy steps. Real life simply doesn’t work that way. 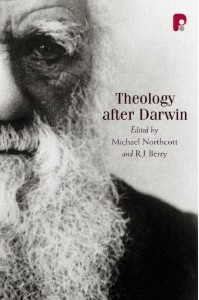 I received a book recently Theology After Darwin (not available in the US – but available from amazon UK (HT DV)). This book contains 11 scholarly essay on theology in the context of evolution. I haven’t read much of the book yet – but intend to post a sporadic series through the book as I have a chance to read and process the ideas put forth in the various chapters.

The first chapter, by R. J. Berry, an evolutionary biologist and Professor Emeritus at University College London, explores biology after Darwin. While the emphasis is on science rather than theology the essay brings up some important issues. I am not going to bother to try to summarize the entire chapter, but rather concentrate on a common conception, or perhaps misconception, regarding evolution that came to mind as I read.

Evolution is bloody and violent and inconsistent with the revealed nature of God. It is often suggested that evolution is inconsistent with the notion of God as creator and creation as good. After all evolution relies on death and destruction, competition and conquest for life to develop and to progress … doesn’t it? Alfred Lord Tennyson famously addressed the conflict between the love of
God central in the Christian faith and the apparent bloody callousness
of nature with an image that sticks in the imagination:

Are God and Nature then at strife,
That Nature lends such evil dreams?
So careful of the type she seems,
So careless of the single life;

That I, considering everywhere
Her secret meaning in her deeds,
And finding that of fifty seeds
She often brings but one to bear,

‘So careful of the type?’ but no.
From scarped cliff and quarried stone
She cries, ‘A thousand types are gone:
I care for nothing, all shall go.

Man, her last work, who seem’d so fair,
Such splendid purpose in his eyes,
Who roll’d the psalm to wintry skies,
Who built him fanes of fruitless prayer,

Who trusted God was love indeed
And love Creation’s final law-
Tho’ Nature, red in tooth and claw
With ravine, shriek’d against his creed-

Nature red in tooth and claw, of fifty seeds but one brought to bear, a thousand types are gone. Tennyson wrote before Darwin’s The Origin of  Species (1859), but after the influential book by  Robert Chambers Vestiges of the Natural History of Creation published in 1844. (Darwin did not, we must remember, drop a new idea in the lap of an innocent and unsuspecting age, he was part of a swirling mass of ideas. He rushed publication of his ideas to avoid being scooped. Darwin had an important new insights, but if he had not published, some one else would have – and soon. )

It appears difficult to reconcile evolution with a God of love. For Tennyson the observation of the predators and prey along with the apparent wastefulness of the natural world was sufficient to raise questions. Darwin’s ideas of gradual change by natural selection takes it one step further. Predation, waste, extinction, and death are part of the creative process. A commenter put it quite bluntly on the post linked above: “Theistic evolution gives a false representation of the nature of God
because death and ghastliness are ascribed to the Creator as principles
of creation.“

But is this really true? When we consider evolution and natural selection we often think of it in terms of survival of the fittest. The vision is of competition and bloody fight, of victors and vanquished. But this is not the point. Fitness in biology has little to do with competition and victory in the local specific situation. Rather the fittest are those who raise most offspring, nothing more, nothing less. In the long run a variant with greater fitness will survive, but in the short term many will coexist. Evolution does require a natural cycle and process of life and death with successive generations. But this need be neither violent or wasteful. Each succeeding generation fulfills a role in the process of the unfolding of creation.

When we come to mankind and human mortality the theological issues become more complex. But leaving that off the table for the time, there is nothing in Genesis, or in a careful reading of Romans, that suggests that immortality was the norm in biology. prior to the Fall There is nothing, so it seems to me, that suggests that predation or hunting is the result of human sin. Evolution is a marvelous creative mechanism to explore and expand the possibilities and potentialities for life on this planet. It is more akin to growth and flowering than to violence and conquest.

What do you think? How do you view evolution – as violent, wasteful, ghastly or as natural growth and flowering or perhaps something else?