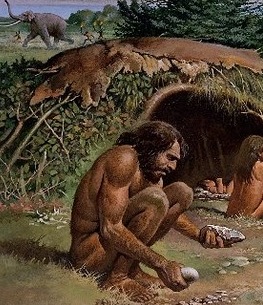 The Cave Man Diet, or Paleo Diet, is getting attention. (Nothing is said about Culver’s at all.) The big omission, I have to admit, is that those folks were hunters — using spears or smacking some rabbit upside the conk or grabbing a fish or two with their hands … but that’s what makes this diet so fun: you gotta go the whole way and hunt your own food. Running and chasing and throwing and grabbing and stuff like that. Going to the grocery store for the Paleo diet creates ambivalence for me.

What are your suggestions for Paleo dieters?

Our Stone Age ancestors lived in an uncomfortable world, spending their 30-year life spans hunting and gathering without air conditioning or heat. But some say the cave men ate better than we do.

That’s the premise behind the Paleo diet, a health and weight-loss trend that encourages people to eat modern-day versions of Paleolithic food.

Several weeks ago, one group of health-conscious Californians took on the Paleo diet and planned to spend nine weeks eating like cave men. That means consuming only animals, vegetables, fruits, nuts, seeds and mushrooms, said Rick Larson, co-owner of CrossFit West Sacramento, the gym running the challenge….
Out is anything that humans began eating after the agriculture and animal husbandry revolutions, meaning no dairy, beans, grains or starches and absolutely nothing processed.

“If you can’t eat it raw, then you shouldn’t consume it,” Larson said. (Although, since our Paleolithic ancestors did have fire, cooking food is permissible.)