One of the aspects of Israel’s richness as a global, cultural marvel is that the jewel of the Middle East attracts a diverse community dedicated to her eternal health.

Influential people around the world do their individual bits to accomplish that goal, and Colette Phillips is one who shines in her chosen role.

The native of Antigua, now a successful CEO of a boutique public relations and marketing firm in Boston, is a passionate champion for Israel. It’s in her blood.

As the only African-American member of the board for the American Jewish Congress, Colette speaks before groups on behalf of Israel. A recent topic is her trip there in the spring, hosted by the America-Israel Friendship League (AIFL). Her personal experiences and philosophical journey are a rich tapestry.

“I grew up in a very pro Israel family in the Caribbean; my dad was a Zionist in the sense that he considered Israel his spiritual homeland as a person who was devoutly religious and whose life was built on Judeo Christian principles.

“For me, being pro Israel was quite easy; I grew up with a belief of tithing to your spiritual community—where you’re spiritually fed. We all have a spark of the divinity in us.”

Colette easily sees the relatedness between Judaism and the faith of her family, Christianity.

“It’s the whole aspect of Tikkun Olam [“Repairing the world”]. In the Christian faith it is to whom much is given, much is expected.”

Her parents have driven much of their daughter’s success, through the example of their own integrity and willingness to help others.

“My parents were very successful entrepreneurs, generous and giving in their activities and helped many people through their philanthropy. When I came to this country, traditions don’t die with you; you don’t check your beliefs and habits at the airport. You bring them with you.”

As she navigated a new country, with all its myriad opportunities and challenges, Colette eventually linked to the Jewish community.

“Right in middle of the First Intifada, and as Saddam Hussein had invaded Kuwait, I began noticing the ADL and other communities. My father said Israel is like a drop of blood surrounded by sharks. My parents had a very good view, a worldview of maps and a history that showed us Israel was surrounded by Lebanon, Syria, Egypt, and Jordan, and all four countries were not necessarily friendly to Israel.

“I didn’t have a full understanding of that until I went to Israel. I drove to the northern side of the country and by the Jordan River, and the Sea of Galilee. I stayed at a kibbutz and you could literally see Lebanon. I had quite a revelation of how particularly challenging the citizens of Israel live in a mode of survival. They were very vulnerable. And I don’t think people quite get that.”

In the intervening years, Colette has stuck close, never drifting very far from the marvel of the Jewish state. Her recent trip with the AIFL reflects that.

“To see the growth and evolution over 27 years…to see the innovation, and steely sort of resolve. What I admire in Israelis is their sense of resilience.”

Whether it’s the cosmopolitan cafes in Tel Aviv, or the religious sites in Jerusalem, Colette is aware that the Israelis share one remarkable trait, for sure.

“Even though they are vulnerable to internal and external terrorism, they do not allow their lives to be determined by fear. We went to the Temple Mount with a friend. That in itself was quite remarkable. And our guide is involved with bringing kids to see the Golan. I had asked, Is it safe to be here?”

Even dispensing with a general unease in visiting the Palestinian areas was a revelation.

“I went to Abu Gosh and was telling some friends that one of the absolute wonderful things for me was the fact that while I was there and one of the things I observed (my friend is like 6’4” Australian Jewish, and I’m black 5’4”)…I went into this restaurant on Shabbat that was packed and 90 percent of the patrons were Jewish. In America people stare at an interracial couple, but here nobody looked at me! Nobody stopped what they were doing. That was sort of a defining moment for me.”

She also couldn’t help but wonder at another thing Israel is known widely for achieving in only a few decades.

“The innovation! Israel’s national service could become a model for America and other countries. I personally think young people [she came to college at 17] would benefit.

Colette’s parents told her she couldn’t come back—Maybe you’re not mature enough to be on your own so, give it a couple months and if you don’t like it you can come back home.

“In their wisdom, I did stay two weeks and forged very strong friendships. My parents then called the dean because they didn’t hear from me! I had immersed myself in school and America. In Israel I love the fact of national service; not just being in the IDF. I could see young urban kids who see a lot of violence among young people in America—I think they lack a sense of purpose. I think the national service in Israel helps young people to mature, to have a sense in pride in country, teamwork.”

An inevitable outcome of the Israel experience, too, is awareness of the threats. Colette is uniquely positioned to deal with several of those in her advocacy work.

“It’s hard to speak of Israel and not talk of the wave of anti-Israel advocacy like BDS. It is to me distressing, because I find it egregious and intellectually dishonest and so completely untrue and unfair. It’s almost like Israel has become a victim of its own success, in 70 years. It has evolved in a way that is beyond comprehension. Today they are the leading startup. A beacon of democratic principles and values in the Middle East. To hear people make comparisons to South Africa…it is being perpetrated and falsely. As a teenager I marched in Antigua; every year in May was ‘March for South Africa.’ I know the apartheid system is a regulated policy based on race; in Israel Arabs and Jews move and live peaceably.”

She sees the obvious hypocrisy inherent to the BDS movement and anti-Zionist movements.

“How about Burma, or Boko Haram? Nigeria? China—that we do a lot of trade with
—and they are persecuting the Muslims? And they have brutalized the Tibetans. Russia’s annexation of Chechnea and Crimea also comes to mind.

“When you single out one country…and you look at all the other countries around the world…one has to ask the question: Why Israel? The answer is the demonization and delegitimization of Israel.”

For her personally, Colette draws on her own experiences.

“My role is—beyond being an advocate—I consider myself a character witness for Israel. Racism and anti-Semitism are the twin towers of hate. Often where there is racism, you’ll find anti-Semitism.

“There has to be a coming together for allies and community. If I can be a facilitator and a connector of that, so be it. Jews and blacks have to work together. For a lot of black people who are Christians, Israel holds a special place for them, because if you are rooted in your religion, you know Christianity has its roots in Israel. Jews and blacks have a shared history of persecution.”

Thriving on the heels of initial doubt and dislocation fuels everything this remarkable friend of Israel does. Colette Phillips has been a woman of influence for quite some time. Happily for Israel, she will always embrace the role. 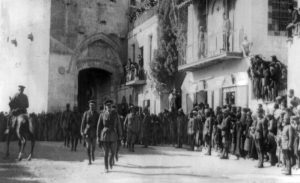 Allenby, Allenby
archives most recent
More from Beliefnet and our partners
previous posts