Today’s Tarot: Queen In The Middle 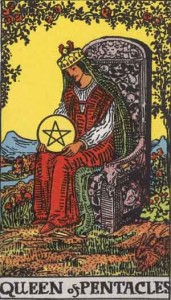 I did a simple three-card spread for myself this afternoon, to check the energy around something. This is a spread my teacher used to do:

Card on left: Person A
Card on right: Person B or matter at hand
Middle card: the energy between.

And from there you ride the intuitive wave 🙂

What did I draw?

To me, this itself is remarkable. More than one of ANYTHING and I take note. I take note of spreads that are mostly Major or mostly Minor or mostly Court and here with three chances they are all of a piece.

What does it mean?

Honestly, dear reader, I’m not willing, yet, to reveal the mystery and meaning behind this spread but I will say a few things, free-associating:

See, Kings have to be grounded; they have Kingdoms to rule. They aren’t Knights all rushing about and they aren’t Pages who aren’t responsible for rules or laws or being in charge. AND they are not Queens, which is the rank I find hardest to decipher and it really depends on who you read (and your intuition). Are they as powerful as Kings but merely in the social sphere and at home? Kindly, helpful Queens. Even the Queen of Swords helps you with her wisdom.

So if we are dealing with two people, we can say they are on an even footing as Two Kings, but with different strengths perhaps: earthly realm versus the realm of the mind, air. One of them enjoys the elements and the lushness of the grove and the other? Oh, he is thinking. Very busy THINKING. Preoccupied.

Between them then is this Queen and her apple (as she is pictured in the Tarot of the Hidden Realms) and I do take her as more symbolic and situation-y than as a PERSON per say.

OR if she is a person then she is what the two of them create together. Nourishment. Feeding. Fertility. Sweetness. Apple-ness. Milk. The lushness of the grove. The first fruit. Edenic. Woman as PLACE. What they create together.

And yes there are other ways to read it, but I think I will leave you with that one for now except to say this: Queen of Pentacles as what one would create with another, well, I very much look forward to what comes next 🙂 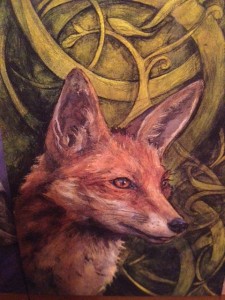 Today's Tarot: Ace of Wands
archives most recent
More from Beliefnet and our partners
previous posts