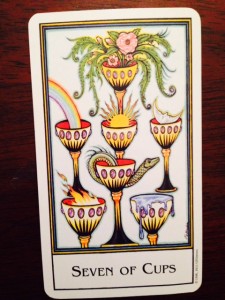 This card came up earlier today when I was doing a video forecast for Aries, for the week of February 9th. The Seven of Cups. And I remembered seeing it just days earlier for a monthly forecast but couldn’t remember which sign and… this blog post so far feels very Seven of Cups to me, a bit neither here nor there, confused.

What is the difference between these?
1. Confusion
2. Overwhelm
3. Buffet of options.

Does perspective make all the difference in the world?

Now if we want to draw an advice card then yes we can do that. But sometimes, really, we need this. We need this not knowing. We need this water. We need these little creatures in the little cups, snake, moon, fire, flower, rainbow, sun (I am looking at the Palladini deck).

Ah. Now I remember. Telling folks last week that they didn’t have to sip from each cup, that not every cup was for them. The idea of… not needing to try it all. Better not to try it all. Maybe even just… gaze at cup.

Seven always leads to Eight and I just pulled the Eight of Wands. And then the Two of Wands. I feel optimistic. You’ll figure it out. You won’t wander oceania forever. Two of Wands, two paths. From the mystical Seven to the forceful Eight to the Choosy Two. You will parse, you will discern, you will decide. You will cull, glean, harvest those Seven Cups into Eight Frames/Flames of Mind until only two remain, two fiery thrilling possibilities. 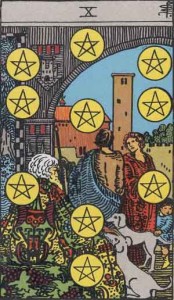 Today's Tarot: Ten of Pentacles!
archives most recent
More from Beliefnet and our partners
previous posts