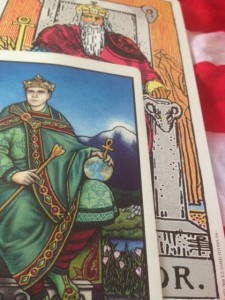 He’s sitting on his stone throne, not moving. Not flexible, nope. Like he was born there, sprung from the big chair. He’s got a gold crown and a suit of armor. His throne is adorned with rams’ heads. He’s head butting the world.

Is he stubborn? I think so. But it’s the kind of stubborn that comes from having been granted power, authority. He’s stubborn because he can be. But it’s more than that. The Emperor creates order. He’s The Rules. Father. Protector. Master and Commander 🙂 He doesn’t just talk the talk, he walks the walk (or sits the sit, as the case may be). I do not see the Emperor dancing. He’s no party animal. He’s the one waiting for you, at home, looking at his watch, when you stumble in drunk 😉

Truth is, when I see the Emperor, I don’t feel much. And maybe that’s the point. He’s not about feelings. He’s not Miss Passionate Empress here. He’s large and in charge. (I think of the Emperor as the Empress’ boyfriend and I wonder what she thinks about him. Is he too much of a control freak? Just enough?)

Let’s say you are doing a Tarot reading for yourself. You are procrastinating again and you see the Emperor. This could be a “buckle down” message. Make some order in your wacky routine. It could also be a guide — a guidance counselor, a teacher, someone stern to whip you into shape. A PERSONAL TRAINER. Your boss. Someone is in charge. It may not be you.

But he will steady you. Mightily. Hold you in his strong arms.

*
On an astrological note, Mercury goes retrograde tomorrow and the astrological powers that be tell us not to sign contracts or buy new computers or phones. Also to double-check travel plans, check for flat tires, for oil levels in the car. You  may be writing your email to Uncle Hank and then by accident send it to your boyfriend, or vice versa. Things go wonky. Mercury doesn’t want to hurt you but he does think it’s funny when you trip up. So you just want to be careful, okay? That messages reach their correct intended destinations for the next three weeks.

The most important thing, I think, is to know where exactly in your chart, Mercury is transiting (traveling) so that you can attempt to pinpoint the areas of possible… not confusion, but… redistribution. Review. Redo.

The retrograde period could even bring something, or someone, lovely, back to you, from the past. Or something you wished would stay away 😉

Dear Readers, what do you see when you see the Emperor? I think I’ll do an Emperor Part Two next. Discuss some of the symbols in this card…

The Lovers: A Story For Mercury Retrograde!
archives most recent
More from Beliefnet and our partners
previous posts