In one of the early surprises at the 2012 Summer Olympics, Brady Ellison and his USA Archery teammates to a silver medal performance in the Team event. The big shock came in the semifinals when the Americans knocked off gold medal favorites South Korea who just a day earlier had set two world records. Team USA game up one point short, however, in the gold medal match when Italy came up with a perfect 10 on the last shot for the 219-218 victory.

Ellison is expected to contend for another medal in the Individual Recurve event and some have him pegged as the gold medal favorite. Earlier this summer Inspiring Athletes caught up with Ellison who says his faith has helped him not worry so much about the outcome of any given competition–even the Olympics:

“Philippians 4:13 says, ‘I can do all things through Christ who strengthens me,'” Ellison says. “Once I put winning in God’s hands, I stopped worrying about that. I just went to tournaments and shot with no fear, doing only the best I can do and leaving the rest up to God.”

Click below to check out the full interview with Ellison:

A conversation with Brady Ellison 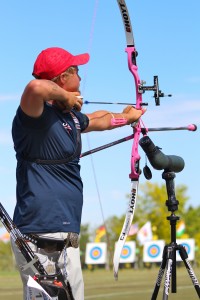