In 1984, Jesse Williams went to his first Summer Games. It was a memorable moment for many aspiring American athletes who were able to watch the world’s greatest competitors go head-to-head in their proverbial backyard.

Forgive Williams if he doesn’t remember too much about his first Olympic encounter. After all, he was only a few months old at the time. But eight years later, the world-class high jumper caught the fever while watching the 1992 Games in Barcelona. Thankfully for American track and field fans, he was never cured of that infectious desire.

On Monday night (June 25th), Williams officially qualified for his second trip to the Olympics. In this Inspiring Athletes interview, he talks about the characteristics that have driven him to greatness, how his faith has been a steadying force in his life and how he hopes winning the gold medal at the 2011 World Track & Field Championships will launch him into the Olympic record books:

Bonham: How did you get into high jumping and what about the sport do you most appreciate and enjoy?

Williams: I have always been known as a natural jumper. Whatever sport I did I could always out jump everyone. I also as a kid would make up games with jumping involved so I knew I could win.

Bonham: What are some key principles that you’ve relied upon throughout your Olympic pursuit?

Williams: Putting God first and working hard. I know that God has a plan for me and no matter how many times I fail I know its in Gods plan. I never let myself get down when I have a bad performance I use it as inspiration to work harder. I know that if I work hard and do everything possible to succeed then I know that’s all I can do. I love putting forth the work then going out to compete and have fun competing for the Lord.

Bonham: Tell me a little bit about you became a Christian.

Williams: I have been grateful and blessed in life. I grew up in a Christian family and was taught my entire life Christian values, beliefs and morals. At a young age I accepted the Lord into my life and He has been with me ever since. Having a personal relationship with the Lord always gets me through the hard times and good times. I am far from perfect but always try and learn and never to repeat my mistakes and sin.

Bonham: How has your faith in God specifically helped you deal with the challenges you’ve faced as an international competitor?

Williams: I spend many months of the year competing internationally and its not easy being away from home all the time. I get lonely at times and wherever I start to get that feeling I open the word. The word is always what I fall back when I am feeling lonely or something is not going well. I go many worldly places and try and distance myself with boundaries so I do not get sucked into sinful ways.

Bonham: What are your individual expectations for the Olympics in London?

Williams: I live my life through God and am not worried about what will happen in London. I have to work hard everyday and prepare myself to the best of my ability to get on top of the medal stand in London. If this is not God’s plan then I will know that I have given it my all. I know that I have the ability of winning in London and would be a great honor if my Olympic game dream were to come true. I always shoot for the stars and try and win every meet I compete in.

Bonham: How much did the gold medal performance in Daegu, South Korea at the 2011 World Championships bolster your confidence?

Williams: Winning in Daegu was a huge boost of confidence. I never thought I was talented enough to ever be world champion but God had this in His plan and it made me believe that anything is possible through the Lord. I know that I have the tools to be an Olympic champ after Daegu and I used that as motivation everyday in training.

You can also find a wealth of great information about the Olympics and the US Olympians by visiting NBCOlympics.com and TeamUSA.org including photos, videos, bios, news stories, results and much more! 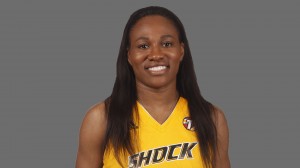