Mike Edwards took home the top prize at the Tire Kingdom NHRA Gatornationals in Gainesville, Fla., Monday morning after the finals were rained out on Sunday afternoon. Edwards defeated Greg Anderson thanks to a near perfect reaction time of 0.003. It was Edwards 34th career Pro Stock win and first of the 2012 season. He shot up to second place in the overall standings behind Anderson.

In an interview with Edwards last season, he told Inspiring Athletes about how his 2009 championship afforded him the opportunity to share his faith with a captive audience: “I had to get up and speak (at the banquet) and most of my whole talk that night was about what I stand for and the things that mean the most to me,” Edwards said. “Of course, that’s the Lord Jesus. Whether they believe it or not, they respect us a lot and they respect what we stand for.

Check out that full interview by clicking HERE.

And keep up with the team’s ministry efforts by visiting the Mike Edwards Motorsports site HERE. 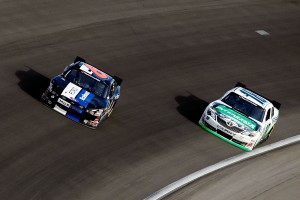