They don’t call it “The Great American Race” for nothing.

The Daytona 500 is the equivalent to the NFL’s Super Bowl and Major League Baseball’s World Series except for the curious fact that it’s the first race of the season and it’s doesn’t actually determine the Sprint Cup Series champion. But it’s still the most watched racing event of the year and has transcended all of sports for the past 25 years.

This year’s race is expected to be especially interesting with the departure from tandem racing and a return to the traditional pack racing that most fans have come to love at the super speedways like Daytona and Talladega. There are plenty of great story lines too. For instance:

2011 Sprint Cup Series champ Tony Stewart hopes to get his title defense off to a good start in the #14 Stewart-Haas Chevrolet.

Five-time champ Jimmie Johnson’s unprecedented streak was derailed in 2011 but he looks to get back to his winning ways with a statement win. Only problem is his crew chief Chad Knauss was hit with penalties after the #48 Hendrick Motorsports Chevrolet failed to pass inspection last week.

David Ragan, Kurt Busch, AJ Allmendinger, Kasey Kahne, Michael McDowell, Landon Cassill, Mark Martin and Clint Bowyer are some of the notable drivers starting the 2012 season in new rides (click HERE to see where these guys all landed). Kurt Busch will be trying to prove that his temper issues are behind him while working with in Phoenix Racing’s #51 Chevrolet while Kasey Kahne takes over the #5 Hendrick Motorsports Chevrolet, Clint Bowyer moves to the #15 Michael Waltrip Racing Toyota and AJ Allmendinger picks up a golden opportunity in the #22 Penske Dodge.

Trevor Bayne makes his return to the Daytona 500 after the 20-year old shocked the racing world last season by winning his first Sprint Cup victory in just his second attempt at that level. Bayne will again be driving the #21 Wood Brothers Ford.

Ricky Stenhouse Jr. will be making his first appearance at the Daytona 500 in the #6 Roush Fenway Ford. Stenhouse is coming off his first Nationwide Series championship.

Kyle Busch, like his older brother Kurt, hopes to put the shaky ending to his 2011 season behind him for good. Similar personal troubles and off-the-track issues put his career in doubt. But Joe Gibbs stuck with his racing phenom and will once again pilot the #18 Toyota in 2012.

Aric Almirola gets the chance of a lifetime in the #43 Richard Petty Motorsports Ford. After spending most of his career thus far in the Nationwide and Craftsman Truck series, Almirola will team up with #9 driver Marcos Ambrose to work towards getting the King into the Chase for the first time since it was instituted in 2004.

Danica Patrick will spend the entire year proving she belongs with the big boys. The former Indy Car driver will race an entire season in the Nationwide Series (driving the #7 JR Motorsports Chevrolet) and a partial season at the Sprint Cup level including an appearance in the Daytona 500 driving the #10 Tommy Baldwin Racing Chevrolet.

Before we get the 2012 season started, take some time to check out some of the Inspiring Athletes interviews we posted last year along with the Morgan Shepherd interview released last week: 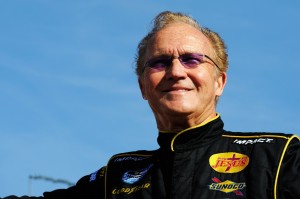