The Inspirational Sports Report: Waltrip gets into NASCAR’s HOF, Edwards nabs Pro Stock victory in Bristol and Thomas leads Bruins to the Cup

It was another busy week of sports that started with the Mavericks’ defeat of the All-Star stacked Miami Heat for the NBA title and ended with Northern Irish phenom Rory McIlroy destroying the PGA field at the Congressional and becoming the youngest winner in U.S. Open history. Here are a few notes from this week’s Inspirational Sports Report:

It happened a little later than many expected, but NASCAR legend Darrell Waltrip was finally voted into the NASCAR Hall of Fame as a member of the organization’s third class. He will be officially inducted next January along with Dale Inman, Glen Wood, Cale Yarborough and Richie Evans.

Waltrip currently serves as a race analyst for Fox Sports and as a show co-host for SPEED but was recognized by the Hall for his 84 Cup wins and three championships. Waltrip was excited when his name was announced, but as he told me last fall, it means nothing without his faith in God.

“At some point, we’ve all realized there’s a lot more in life than just winning races,” Waltrip told me. “I hear that a lot. As I was becoming successful, I’d listen to other athletes and they’d say, ‘Well I had it all, but there was something missing.’ There’s always that, ‘There’s something missing.’ It’s that void you have in your life when you don’t know the Lord.”

You can read the full interview with Waltrip by clicking here.

NHRA Pro Stock veteran Mike Edwards picked up his second win of the season, 30th of his career and third consecutive at Bristol Dragway by defeating Erica Enders in the finals of the Thunder Valley Nationals yesterday.

Edwards crossed the finish line in 6.685 at 205.79 mile per hour in his Penhall/Interstate Batteries Pontiac GXP. The 2009 series champion also jumped up to second in points and now trails Jason Line by just 24 points. But Edwards maintains that his work with Young Life, a popular national youth ministry that allows teens from every race city to attend special events hosted by Edwards’ team, is far more important.

“Life’s all about Christ,” Edwards told me. “It’s not about winning races. I want people to think of me as somebody who stands up for Christ even in an environment that’s pretty brutal at times. I want to stand out from all the other drivers.”

Be looking for more from my interview with Edwards in an upcoming Q&A right here on Inspiring Athletes.

Boston Bruins goalie Tim Thomas not only had a career year, he was a huge part of his team’s Stanley Cup championship against the Vancouver Canucks that concluded in game seven last Wednesday night. Thomas was selected the Conn Smythe Trophy winner given to the playoff MVP and became just the second American-born NHL player to do so. Thomas also became the oldest winner of the award at 37 years, 62 days.

Off the ice, Thomas is a faithful member of the Church of Christ in Burlington, Mass. His brother Jake is a youth pastor in Mission, Texas. 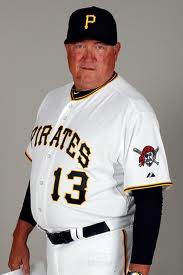