Pittsburgh Pirates outfielder Matt Diaz on eternal perspective, evangelism and giving it everything he’s got

EDITOR’S NOTE: Since this interview was originally posted, Diaz has returned to the Atlanta Braves.

Somehow, you’d think having just under a .300 career batting average might qualify a Major League player for superstar status. But somehow, Pittsburgh Pirates outfielder Matt Diaz (pronounced DIE-az) has spent nine seasons well below the radar. And that’s okay with him.

Diaz, who happens to be the brother of national Christian recording artist Jonny Diaz, is happy to be a productive team player and more importantly someone whom teammates and fans alike can look to as an example of God’s love. In this interview, Diaz talks to me about eternal perspective, evangelism and exemplifying Christ by giving everything he’s got on the field:

Bonham: How did you become a Christian?

Diaz: I grew up in a ministry family. My dad was a preacher. I received Christ at a Dawson McCallister meeting when I was 13 years old, but I didn’t ask Him to be my Lord until I was 19. I remember when I was unpacking luggage and settling into in my college dorm. I saw a Bible my mom had packed for me. Everything I read that night hit me in the face. I randomly opened it to the passages in Revelation about being lukewarm. I realized that I had been living lukewarm. I wanted the best of both worlds. I wanted to fit in. And there’s nothing wrong with fitting in if it’s within God’s will, but I wasn’t willing to sacrifice the things that I wanted. That’s when my faith became real to me.

Bonham: What is a biblical principle that guides your life?

Diaz: What I love about the Bible is that it’s a group of stories but it’s all telling one main story. It’s about Jesus Christ. The story is not about me. That takes a lot of the pressure off me, but it also puts the responsibility on me to point people to who the true story is about. It’s given me an eternal perspective on things. With baseball, it helps because I know that this isn’t all there is in life. If I have a great game, I don’t get too high. If I have a terrible game, I don’t get too low. I know that there’s more to this life and we were created for more than just to play a game.

Diaz: Philippians 1:6. “Being confident of this, that he who began a good work in you will carry it on to completion until the day of Christ Jesus.” That goes back to that eternal perspective. God has made some promises and He’s never broken one yet. I get to live assured that He’s going to keep His promises. It has to be (my favorite verse). I have it tattooed on my left arm. My wife would kill me if I said anything else. It’s a daily reminder. That was the only way I could get the tattoo.

Bonham: How do you deal with the ups and downs of baseball?

Diaz: I’ve been sent down to the minor leagues six or seven times in my career. You’ve just got to have that stability. It’s huge. It’s comforting. And it’s reassuring. To be part of something in this world that’s constantly changing like baseball, it’s awesome to have your hope anchored in something that’s so stable.

Bonham: How do you approach your call as a Christian to reach out to those who don’t believe in Jesus?

Diaz: We Christians sometimes think we need a plan for evangelism. I don’t think Jesus had an evangelism plan. I think He just interacted with the people He came into contact with. That’s what I try to do. I just try to find ways to love the people that I’m around. It’s hard sometimes because I’m selfish and I want to focus inwardly but when I can fight against that and look at other people’s needs, it’s really a stark contrast to what people are used to in such a selfish environment. It’s really an effective evangelism tool. Who would have known that Jesus knew what He was talking about?

Bonham: Does the fact that fans are watching and know you are a Christian change the way you conduct your business?

Diaz: If I break up a double play with a hard slide, people will say, “What would Jesus do?” I’ll tell them, “He would have planted them into the outfield wall.” My Jesus cleared the temple too. That doesn’t mean He lost His cool. It was calculated and He did what He needed to be done to represent His Father. Jesus is my role model and He is whom I try to follow. Everything I do, I know I’m representing Him. Does it mean I do it well all the time? No. But I do ask for forgiveness for the times I bring Him a bad name. 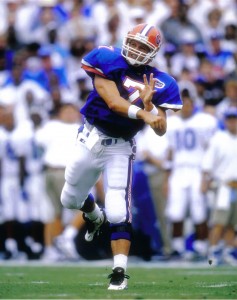