A flood struck a rural area in Tennessee earlier this week, leaving many homes and lives devastated by the aftermath. Buddy McNabb described the moment that he and his three dogs watched in awe as the rising water surrounded his mobile home. The 90-year-old was standing in his kitchen that afternoon with no idea how his life and faith was about to drastically change.

The Waverly Sheriff’s Department reported that at least 22 people passed away in the disaster, and more than 20 people were still missing. McNabb at first believed that he would lose his life in the floods from the record-setting 17 inches of rain for Humphreys County. However, McNabb gave God all the glory for his survival.

In an interview with The Weather Channel, McNabb explained how he watched in horror as his neighbors’ mobile homes floated down the road. He remembered the water rising as high as his shoulders.

“I talked to God a little bit,” McNabb told the interviewer. “He talked back. I was not afraid. He calmed me down, and we just stood there and watched.”

The Tennessee resident shared that his inexplicable survival from the enormous floodwaters was due to God’s protection.

“I just stood there, held onto the counter,” McNabb further explained, “petted one dog, talked to the other two dogs, [and] watched it happen. When it got up to [my shoulders], I thought, ‘Well, this is it. It’s time for me to go.’ And about that time, the water started going back down.”

In the Bible, there are many instances where God saved His people from floods and disasters. God prepared Noah to build an ark to evade the incoming floods. Noah’s faith and obedience to God saved his life and the lives of so many others. Jesus calmed the roaring ocean waters when He and His disciples were on a boat. They initially panicked that the boat would sink, but Jesus told them to have faith and not fear. God’s Word tells us that God will always keep us and be with us. Even though we will all face struggles and trials at points in our lives, we must trust God through it all because He loves us.

Please be in prayer for the residents of Tennessee who were affected by this tragedy. 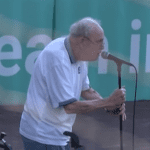