Pylman had been a singer with the Schubert Make Chorus in Grand Rapids, and although he’s never been a professional singer, he can hit the notes just the same.

When Pylman sang, “and the rockets’ red glare reminds us of those who died on field so nobly won,” was when everyone watching began to cry.

After finishing his powerful performance, the veteran saluted the ballpark while the announcer thanked him for his service and performance.

“The Star-Spangled Banner” is the national anthem of the United States. Written by Francis Scott Key in 1814, and later adopted as an American patriotic song with a new set of lyrics beginning in 1931, it has been officially recognized since March 1942 as one of America’s most identifiable tunes.

Pylman said he decided to sing at the game to show respect for his country. While he didn’t do it for any attention, he was undoubtedly blown away that millions of people had viewed the video online.

Many commenters on Youtube said the performance brought them to tears, and they needed tissue because he was singing with his heart.

The performance left many viewers wondering who just John Pylman was, so here’s what we have learned.

A Michigan native, Pylman was born and raised in Grand Rapids.

Pylman joined the Air Force in 1943. It was just a year after graduating from high school. During World War II, Pylman was a navigator on a Boeing B-17 Flying Fortress plane.

After his service with the Air Force ended, he attended Calvin University where he studied education. Afterwards he became the first principal at the Rogers High School in Wyoming. He stayed in that role from 1957 to 1980.

He dedicates his performances to those who have sacrificed and lost their lives for their country.

“I had some dear friends who didn’t survive World War II – five of them in my ninth-grade class,” he said. “We’ve got a wonderful country. It’s worth fighting for.”

Pylman is no stranger to singing the national anthem in front of crowds, this was his ninth performance at the LMCU Ballpark. After watching someone sing a few years ago, he felt inspired to test his pipes in front of crowds because he thought he was a pretty good singer, and he was right.

While most people opt to sing in the shower, John finds joy in sharing his voice with the world and we hope he continues to do so because a gift like that is to be cherished.

Thank you John Pylman for your service and your continued support of this country. 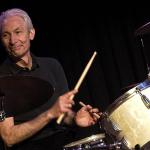