Golf history was made on Sunday when Phil Mickelson won his sixth major PGA Championship as the oldest golfer ever at 50 to achieve the win. The achievement was previously held by Julius Boros for 53 years. Julius won the 1968 PGA Championship in San Antonio at 48 years old. The win on Sunday marked Phil’s first win since 2013 and his first appearance at the PGA Championship since 2005, thus proving to never count yourself out when you still have plenty of fight left in you.

The crowd had turned into a mob by the time Mickelson reached the green on 18 excited to watch him make history.  During his time on the green Sunday, he birdied 5 holes and bogeyed six to complete his round at 1. Phil was able to keep his competition Brooks Koepka and Louis Oosthuizen at bay.

You can see the crowd was certainly pleased.

Phil has an incredible resume when it comes to major tournament history achievements including:

Yet this win may arguably go down as his greatest achievement. The last time Phil won a major was in 2013 at the Open Championship. He beat out second-place finisher Henrik Stenson by three strokes. As mentioned previously this wasn’t Phil’s first time winning the PGA Championship. Prior to the 2021 victory, Phil took home the 2005 Championship.

Is there a major Phil Mickelson has not won?

Yes, the U.S. Open. Phil has had 29 appearances with 10 top 10 finishes, where the closest he was to winning was tying for second place six times. Phil came closest to winning in 2006 when he had a double bogey on the 72nd hole, it put him at 6 over, one shot shy of the first-place winner Geoff Ogilvy.

Phil took home the 2004 Masters as his first major win. He followed that with first-place finishes at the 2005 PGA Championship and the 2006 Masters. Phil did not see another win until 2010 when he won the Masters. The next victory was in 2013 at the Open Championship. Phil wouldn’t see victory again for eight years, but on Sunday that losing streak ended with a historical major win at the 2021 PGA Championship.

Mickelson’s best major win has been the Masters. He finished in the top 10 and won three tournaments from 2000-2010. Aside from making history this year, Mickelson’s best season was 2004 where he won the masters, placed second at the U.S. Open, placed third at the Open Championship, and tied for sixth at the PGA Championship.

After his win praises started pouring in across social media from celebrities.

Truly inspirational to see @PhilMickelson do it again at 50 years of age. Congrats!!!!!!!

Chalk one up for the old boys ✅ ….Congratulations @PhilMickelson ? An absolute tough track…beat me by 33 shots and I only played 2 days!!?? Well done….Well done

Phil defied the odds when he chose to not retire and continue playing the sport that he loved.  Like many other athletes in their middle age, Phil proved that championships can still be won. Look at Tom Brady who just three months ago won his seventh Super Bowl title at 43. In Tennis, Serena Williams is still on the prowl for titles at 39 where historically that is just not seen often. Even though he is in recovery currently due to a car crash in February of 2021, Tiger Woods won his fifth Masters tournament two years ago at 43.

Mickelson had this to say about his historic win.

“I hope that this inspires some to just put in that little extra work because there’s no reason why you can’t accomplish your goals at an older age, it just takes a little more work.”

For nearly three decades, Mickelson has been the most popular American golfers with Sunday showing that he was far from done. His appeal has not wavered with crowds and we would not be surprised to see mobs become a current scene when he is on the green.

He said this experience was “slightly unnerving but exceptionally awesome” and he would “cherish it for my entire life. 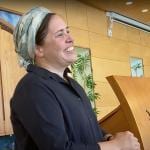 A Historical Moment in Israel, An Orthodox Synagogue Has Appointed Its’ First Woman Spiritual Leader
archives most recent
More from Beliefnet and our partners
previous posts

Charitable Donations Reached a Record $471.44 Billion in 2020 Amidst a Worldwide Pandemic According to Giving USA 2021 Report

After a year plagued with devastation and hardship, it fosters hope to know that charitable contributions did not falter.