During the coronavirus pandemic, Sofia Moncayo has been able to feed thousands in need through a food distribution program. She always leads her team in prayer.

The initiative, taking place at Mosaic West Queens Church in the Sunnyside neighborhood, began in March. Moncayo started to take over the program the following month as it began reaching more people in need.

Majority of the food is donated by a neighborhood restaurant and some other volunteer organizations, along with help from the Farmers to Families Food Box Program overseen by the U.S. Department of Agriculture.

As New Yorkers line up for food distribution with shopping carts in hand, Moncayo starts with prayer.

“We’re super grateful for these people here. In Jesus’ name, we pray,” Moncayo said. She ends her prayer with ‘Amen.’

The group works almost nonstop for hours, picking up heavy boxes, separated thousands of items, and removing snow from the curb.

They don’t stop, even when they are wet, cold, and tire. They weren’t there for pay. The people working there want to help someone who is in need that day.

Moncayo was moved to volunteer because of her Christian faith and memories of her own food insecurity when she grew up in New York.

She remembers vividly joining her family in lines to pick up bread and cheese from pantries. There were times she even felt a sense of shame.

“One of the things that we wanted to make sure is that we don’t look at people on the pantry line as people that need food, and really focus on, ‘hey, these are our neighbors,” she said.

Since leading this ministry, Moncayo has been through her series of struggled. She was furloughed from her position at a construction company and is still unemployed. In addition to this, she owes five months of rent for the martial arts studio she owns with her husband.

Even amid her hardships, she still leads fundraisers and coordinates dozens of volunteers who help distribute more than 1,000 boxes of food to families in the area, twice a week.

“I think helping others has to do something to your brain chemically because if we had not being doing everything that we’re doing, I think this would have been a much scarier time,” she said. “Being able to dig in and help others, it really gives you perspective and helps you believe that you’re going to be OK too.” 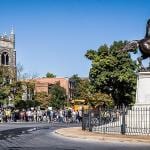 Looking Back: More Than 160 Confederate Symbols Came Down in 2020, SPLC Says
archives most recent
More from Beliefnet and our partners
previous posts