Isabel Pupo was on the verge of death, but after 150 days battling COVID-19, she beat it. “I am a miracle of God,” she said.

Doctors were concerned that the 55-year-old would never open her eyes from a medically induced coma.

“During that time, I actually told the family on numerous occasions, unfortunately, that she was going to pass away, and we were going to have to stop,” Dr. Steven DeBeer, a cardiothoracic surgeon, said.

In July, Pupo was first admitted into Mount Sinai Medical Center with a severe case of COVID-19 and Pneumonia. Doctors said her oxygen levels were considered “unlivable,” CBS4 Miami reports.

“I remember calling up doctor DeBeer, and I said, Steve with such a high BMI and very obese, can you consider her for an ECMO machine,” Dr. Ari Ciment, a pulmonologist, said.

Pupo was placed on an ECMO machine, a respiratory life support treatment of 67 days. She was fighting for her life. Even with the artificial lung, she continued to struggle to breathe.

“Her oxygenation was in the 50 percent by that monitor,” Dr. DeBeer said. “It just did not seem to be a light at the end of the tunnel.”

While Pupo was in a medically induced coma, she said she remembered listening to her daughter’s voice from the phone.

“They would put the phone near my ear, and all I remember was that she would say, fight for me,” Pupo said.

She fought for her family, her ultimate inspiration.

“Before I got intubated, I looked at the ceiling and told God, please help me,” Pupo said. “I thought of them.”

After a difficult battle, Pupo’s situation made a drastic turn. Her lungs that had deteriorated healed, and her oxygen levels increased, CBS4 Miami reports. After battling the coronavirus for 150 days, she finally beat it.

“I am a miracle of God. I am the proof that God exists,” Pupo said. “I have to repeat scientifically, I was not supposed to live.” 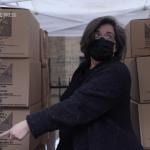