Halima Aden recently made history as the first Muslim model to wear a hijab and burkini in Sports Illustrated magazine.

Aden spoke with CNN following becoming the first contestant in Miss Minnesota USA to wear a hijab and burkini. She reached the pageant’s semi-finals.

“There are so many Muslim women that feel like they don’t fit society’s standard of beauty,” Aden told CNN in 2016. “I just wanted to tell them it’s OK to be different, being different is beautiful too.”

This isn’t the first time she’s made history. She was one of three black hijab models featured on the cover of Vogue Arabia right beside Ikram Abdi Omar and Amina Adan.

She also broke barriers in British Vogue as the first hijabi woman on the cover.

The Somali-American model grew up in Kenya’s Kakuma refugee camp before she moved with her family to the US when she was seven.

Her Sports Illustrated shoot was photographed by Yu Tsai at Kenya’s Watamu Beach.

Don’t change yourself .. Change the GAME!! Ladies anything is possible!!! Being in Sports Illustrated is so much bigger than me. It’s sending a message to my community and the world that women of all different backgrounds, looks, upbringings… can stand together and be celebrated. Thank you so much @si_swimsuit & the entire team for giving me this incredible opportunity.

Aden felt representation was important. She always wanted to inspire those who felt they weren’t represented that anything is possible.

“Growing up in the United States, I never really felt represented because I never could flip through a magazine and see a girl who was wearing a hijab,” she shared in a behind-the-scenes video. “Don’t be afraid to be the first.”

This moment has been a dream come true, not only being able to grace the cover of the magazine but to be able to shoot it in Kenya where she grew up.

“I keep thinking (back) to sex-year-old me who, in the same country, was in a refugee camp,” Aden told Sports Illustrated. “So to grow up and live the American dream [and] to come back to Kenya and shoot for SI in the most beautiful parts of Kenya – I don’t think that’s a story that anybody could make up.” 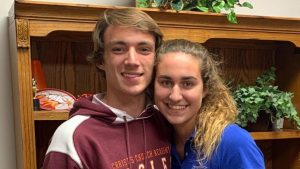 Teens Stranded in Ocean Pray For Help, Rescued By Boat Named 'Amen'
archives most recent
More from Beliefnet and our partners
previous posts