Jennifer Hudson, who will star in Aretha Franklin’s biopic ‘Respect’ as the Queen of Soul herself, just released a new song entitled “Here I Am (Singing My Way Home”).

The song, co-written with Rock and Roll Hall of Fame and Grammy award-winning songwriter Carole King and Jamie Hartman, will be included on the ‘Respect’ soundtrack. It is the only original song that will appear on the album’s tracklist.

“Music is such a living and breathing character in this film, as it was in Ms. Franklin’s life. The process of creating this song was like constructing the greatest tribute I could possibly offer to her spirit,” Hudson expressed in a statement. “It was the final exhale of this extraordinary project and one that I let out with complete fulfillment.”

The Grammy award-winning artist shared that writing the song with King and Hartman was ‘an incredible privilege.’

“Our goal was to show that music was always the anchor for Ms. Franklin, in all that she did, and I hope this song illustrates the strength of her voice – both literally and figuratively – which always brought her home.”

When asked about the collaboration with Hudson and Hartman, King shared, “Writing a song with Jamie Hartman and Jennifer Hudson felt both familiar and fresh at the same time. The process of songwriting continues to amaze me. One minute there’s nothing, and then a song grows out of the seed an idea.”

King also shared that the seed was dormant when the three first met virtually.

“Jennifer and I had previously performed together, and I was excited about writing with her for no less than a film called Respect in which Jennifer plays Aretha Franklin,” King said. “I’m so pleased to have not just one but two songs as part of the soundtrack of Respect.”

King co-wrote “(You Make Me Feel Like) a Natural Woman” for Franklin. The 1967 version of this song climbed to number 8 on the Billboard Hot 100 in 1967 and became one of her most recognized songs.

The movie will spotlight Franklin’s struggle to find her own voice as she navigated her career.

Hudson was selected to play the Queen of Soul by Franklin before she passed away in 2018. In an interview with Entertainment Weekly, Hudson shared that she met with Franklin in New York after winning her Oscar for her role in ‘Dreamgirls.’

“There was no script at the time, but she wanted to meet with me, and we stayed in contact after that,” Hudson said. “It was when I was on Broadway when she called me and said, ‘I’ve made my decision and it is you, young lady, who I want to play me. But don’t you tell a soul’ And I was like, ‘Yes, ma’am, I won’t!’”

The film, directed by Liesl Tommy, hits theaters on August 13. Check out the new song release in the video below. 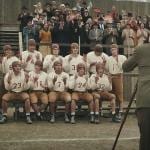 Based on a True Story, “12 Mighty Orphans” is a Must-See For Anyone Who Loves a Good Underdog Film
archives most recent
More from Beliefnet and our partners
previous posts