Andy Williams of the Christian band Casting Crowns was in a serious motorcycle accident. The band is calling on fans to pray for its former drummer during this difficult time.

Williams was hit by a vehicle when he was headed to church on Sunday. As a result of the incident, he is on a ventilator with “severe trauma to his body and brain,” the group announced.

The doctors are monitoring Williams closely. They want him to “wake up on his own.”

“So please stop what you’re doing and pray for Andy to wake up,” Casting Crowns said in a statement. “Pray for his wife Kelly, his two sons Asher and Aiden, and his sister Mary.”

Fans quickly responded to the “East to West” group’s request. The post has since gone viral, with 126k reactions, 38k comments, and 32k shares with fans offering prayers and well wishes in the post’s comment section.

One fan wrote, “Father in the name of Jesus Christ. I pray that Andy will wake up completely healed and restored to normal. I thank you Lord, for hearing our prayers. By your stripes, He is healed! Isaiah 53:5…”

“I speak LIFE over you in the name of Jesus! Don’t stop fighting,” another fan wrote. “You shall be fully restored despite what the doctors might say! Dare to believe for the BEST outcome our God is mighty, and He has sent His word and healed him….”

“Pray that Andy Williams will wake up and feel your presence while You heal his body. May his accident bring him and his loved ones closer to You, Lord. May it be a testimony to those around him for salvation and bring You glory in all this. In Jesus Name. Amen,” another fan prayed.

We also lift up prayers of healing and support for Andy Williams. We know that our God is a healing God and is still in the miracle-working business. Please pray for him during this critical time.

Watch his drum solo and farewell performance in the video below. His talent is unmatched! 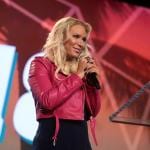 Former Pussycat Doll Experiences Life-Changing Baptism, Says She’s ‘All In’ For Serving the Lord
archives most recent
More from Beliefnet and our partners
previous posts