‘The Bachelor’ Matt James is a Man of Faith, Opens Show With Prayer and Scripture

Matt James is the newest bachelor on ABC’s hit dating reality TV show, “The Bachelor”. James made a statement on the season premiere of the show by leading with his faith.

After all 30 contestants met James upon their arrival, they went into the Bachelor mansion. Before going in, James told the show’s host Chris Harrison that he was nervous.

“I had so long to think about what I’m going to say to you all, and I’m going to take a different approach,” James told the ladies before kicking things off with a prayer. “So if everybody can just bow their head really quick, I’m going to pray for everyone.”

“Dear Heavenly Father, thank you for bringing us all together healthy. Give these women the courage to get through these next few months,” James said in the premiere. “You say that you work all things for the good of those who love you and are called according to your purpose, Father God. And I feel like that’s why I’m here and I feel like that’s why these women are here, Lord.”

The prayer touched some of the contestants to the point of prayer. One said it “touched her soul”, while others thanked James for his openness to share his faith with them. In his prayer, James quoted Romans 8:28.

In an interview with Refinery29, James said the choice to open with prayer was a strategic one. He did not mind that the show was normally secular in nature.

“It wasn’t difficult. Because that’s something that’s extremely important to me,” he commented. “But, I’ll say this: My brother and I have very different religious views — and I would die for him. There’s nothing I wouldn’t do for my brother. That goes to say, just because I don’t share the same religious view as somebody doesn’t mean I see them as any less of a person I could be compatible with. But I think it’s important that they know where my peace comes from and where my decision making is rooted in.” 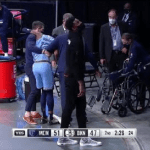