Lauren Daigle “Disappointed” With Critics After Singing at Worship Service

Lauren Daigle has broken her silence after being removed from the New Orleans annual New Year’s Eve celebration, calling the move “disappointing”.

On December 9th, Mayor LaToya Cantrell became frustrated after Lauren Daigle participated in an outdoor worship service in the city in November. Cantrell said it violated COVID-19 restrictions the city had in place.

Cantrell wrote a formal letter to Dick Clark Productions saying they must remove Diagle from the NYE lineup. In the letter, she wrote, “She harmed our people, she risked the lives of our residents, and she strained our first responders in a way that is unconscionable — in the midst of a public health crisis.”

Daigle said the kind words from fans has helped her deal with the mess and was a “balm for my soul throughout this process”.

“Your rights to protest and worship are enshrined in the First Amendment,” Landry wrote. “I vow to do everything in my power to protect them.”

Despite the outpouring of support, Daigle was removed from the show last week.

“I’m disappointed that my spontaneous participation has become part of the political discourse and I’m saddened by the divisive agendas of these times,” she said in a statement.

What was more frustrating to Daigle was that she never planned to perform in November. She spontaneously joined with worship leader Sean Feucht during a rally.

“To be clear, I had no part in creating or planning the event that took place in the French Quarter last month. I was not scheduled to perform, and I was not a part of its promotion. Out riding my bike with a friend, I saw NOPD barricades set in place and uniformed police officers providing protection for a gathering of people that had come to pray. I was asked to sing,” she continued.

“To me, that is the very moment when music serves its higher purpose. It’s what gives people encouragement, hope for a better future, and it’s what can usher joy into their hearts. My involvement was focused on lifting spirits, providing hope, and encouragement, during these polarizing times.”

In a later tweet, Sean Feucht called for the mayor to step down.

“Mayor Cantrell owes Lauren Daigle and every Jesus-loving Christian an apology for her religious bigotry. No politician should be allowed to viciously attack a citizen for her faith and worship,” he wrote. 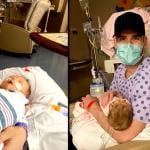