The star of “Parks and Rec” and “Guardians of the Galaxy” was also mocked for his Christian faith.

Fans of the blockbuster movie series “The Avengers” can virtually hang out with six of the stars Tuesday if they contribute to Joe Biden’s presidential campaign.

But it’s an actor who’s not attending who’s getting most of the attention on Twitter — and much of it is hate.

Chris Pratt, known for his roles in “Guardians of the Galaxy” as well as “Parks and Rec,” was blasted on the social media platform by people who said his conspicuous absence was evidence of his secret support of President Donald Trump. From there, the conversation devolved into criticism of Pratt’s Christian faith and the church he attends, which was a source of controversy last year.

The attention began innocently enough on Saturday when screenwriter Amy Berg posted pictures of four actors named Chris — Pratt, Chris Pine, Chris Evans, Chris Hemsworth — along with the line “One has to go.” (“One has to go” is a common Twitter meme, in which people vote out the least popular of four options.)

When people began to select Pratt, they mentioned his membership in a conservative church and speculated that he supports President Donald Trump. “Chris Pratt because he’s MAGA. He’s the worst Chris,” one Twitter user wrote. Soon, people began mentioning his absence in the fundraiser as proof.

Another Avenger who is not participating in the Biden event, however — Robert Downey Jr. — has not been called out for his absence.

Unlike some of his fellow Avengers, Pratt has never spoken publicly about who he supports, although it’s been reported that he donated money to President Barack Obama’s campaign in 2012, according to Newsweek magazine. And Pratt’s wife, Katherine Schwarzenegger, is supporting Biden, according to multiple news outlets. (If the name sounds familiar, that’s because she’s the daughter of Arnold Schwarzenegger and Maria Shriver.)

That didn’t absolve Pratt, though. Twitter users appeared to be on the hunt for evidence of Trump support, seemingly combing through the accounts he follows on Twitter in search of a smoking gun.

Are people really just finding out Chris Pratt is a republican considering he’s been following Ben Shapiro and Dan Crenshaw for a while? pic.twitter.com/ieVjFgw1kK

Some people, however, came to Pratt’s defense, including Brandon Morse, who tweeted “Chris Pratt is one of the few celebrities I actually respect. He’s different, and they hate him for it. I say good for him.”

Pratt himself has been quiet on the matter. His most recent social media posts include an Instagram video of him practicing putting in what appears to be his house and solving a Rubik’s Cube in under a minute.

He has been more open about his Christian faith, leading his Instagram bio with Philippians 4:13 (“I can do all things through Christ which strengthened me”) and saying on Twitter, “I love my family, friends, jokes, Jesus, movies, stories, outdoors, golf.”

He previously weathered criticism over his divorce to Anna Faris and over accusations that the church he attends is against gay and trans people, which he has denied. “Nothing could be further from the truth. I go to a church that opens their doors to absolutely everyone,” he wrote last year on Instagram.

Pratt reportedly attends Zoe Church in Los Angeles and has said he’s been a committed Christian since he was introduced to Jesus Christ by a stranger when he was a teen.

Biden’s running mate, Sen. Kamala Harris, will also participate in the event which will include a question-and-answer session with the stars, and Avengers trivia. 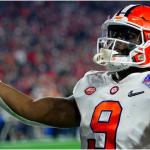