Catch It: Nat Geo’s ‘Into the Lost Crystal Caves’ 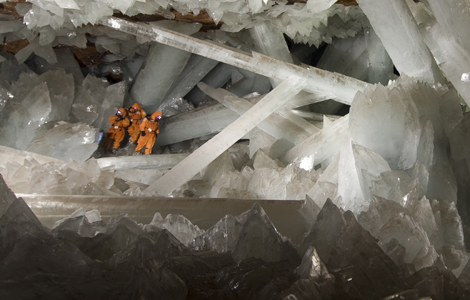 Ok, so I know I’m a bit late in recommending this, but during this weekend when we acknowledge Christopher Columbus for his discoveries*, National Geographic Channel revisits one of the most astonishing discoveries of the decade, a cavern of gigantic crystal formations known as Los Cristales in “Into the Lost Crystal Caves.”

Looking like Superman’s fortress of solitude, but reaching temperatures of 113 degrees and 90% humidity, the football field-sized crystal cavern, located in the Mexican state of Chihuahua, was discovered in 2000 by miners looking for lead, silver and zinc. Scientists suspected that the initial cave was only one of a series of interconnected chambers in the Naica mine and in 2009 camera footage from a drill-mounted bit offered tantalizing promise.
Now researchers are targeting a ventilation shaft known as the “Robin Hole,” hoping that it may be part of the known system or the doorway to an entirely new system. But, the entryway is narrow and in a setting that is only half jokingly referred to as “Hell on earth” — an unprotected man will die in 15 minutes, thank you very much — the stakes are high.
If you weren’t able to catch previous specials, you must tune in to see these unbelievable, incredible crystal cathedrals located a thousand feet beneath the earth’s crust.
“Into the Lost Crystal Caves” premieres Sunday, October 10 at 8:00 p.m. on National Geographic Channel. * Yes, yes. I know the Vikings were here first, and possibly the Polynesians. And I’ve even heard the Japanese may have landed in Ecuador at some point. But work with me ….
read next post