Will Tony Dungy Save Michael Vick? 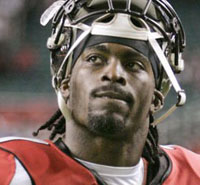 Listening to a description of Michael Vick’s crimes makes me physically ill and I can’t say I feel a ton of empathy for the former foottball star/convict who has recently been hired by the Philadelphia Eagles . So I don’t really know what posessed me to tune in to his “60 Minutes” interview last weekend. I don’t claim to know whether or not Vick’s remorseful comments were genuine, but I found one aspect of the interview surprisingly hopeful: former NFL coach Tony Dungy’s presence at Michael Vick’s side during that intervew.

It seems part of Vick’s character rehab plan as designated by the NFL and the Eagles is for Vick to have a long-term mentor and as an outspoken Christian Dungy has agreed to take on that role. Dungy had met with Vick when he was still in prison and In a recent interview, Dungy has said that Vick has told him that he realizes he needs “to get closer to the Lord” and that is why the former coach has committed to continue to work with Vick.
Lots of folks suddenly find God while in prison. Many a celebrity has found Jesus as part of a smart p.r. move. So it is absolutely fair for the general public to be skeptical and to take a “wait and see” attitude with Vick. At the same time, after watching that “60 MInutes” interview, I found myself thankful for Dungy’s example of compassion and wisdom by stepping into a volatile situation and attempting to lead someone to redemption – without hesitation or skepticism.

'Bandslam': Too Cute (and Wholesome) To Miss
archives most recent
More from Beliefnet and our partners
previous posts