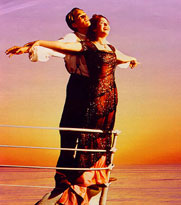 We all need to cry sometimes. And even if life’s going pretty well for you–you have your health, a wonderful significant other, friends and family who love you, a good job, a few bucks in the bank — once in a while, you still just want to be alone and crawl into a little ball on your couch with a blanket, a box of tissues and movie that makes you think about the power of love…and cry.

It’s during those times I turn to one of the movies below. I know that many of you will disagree with some of my choices. You’ll say things like, “What?! She picked that over Casablanca?!” But guess what? This is my list….and maybe I’ve never even seen Casablanca. Anyway, here are my picks for the 10 best movies to put your faith back in love–love of family, love of friends, and love of…love. Post your own thoughts in the comments section below.
10. Selena: When Mexican-American singer Selena, “Queen of Tejano Music” burst onto the music scene in the early 90s, I was too busy banging my head to Nirvana and Pearl Jam to notice. But when she was murdered in 1995 by her fan club manager, I was awakened to the shock, anger, and heartbreak among her many fans. In the heavily Hispanic areas of my hometown, Brooklyn, N.Y., I noticed memorial T-shirts worn by many. In “Selena,” Jennifer Lopez wonderfully portrays the music star (in a performance she hasn’t matched to date) as a carefree, caring, amazingly talented young woman, whose life and career was cut way too short. Watching her fans and family grieve her loss was absolutely heartbreaking. I’ve seen more than one boyfriend cry during scenes from this movie.
9. Titanic: OK, we all know how this movie ends. But it doesn’t prevent me from falling apart during the scene where Jack Dawson, played by Leonardo DiCaprio encourages his love Rose (Kate Winslet) to survive the icy waters after the massive Titanic sinks. “You must promise me that you’ll survive. That you won’t give up, no matter what happens, no matter how hopeless. Promise me now, Rose, and never let go of that promise….never let go.” And then…he dies.

8. The Other Sister: Part inspirational tale, part love story, Juliette Lewis’ portrayal of Carla, a mentally disabled young woman’s who struggles to succeed and live a normal life, is heartwarming and uplifting. Her relationship with fellow college student Daniel (Giovanni Ribisi) who is also mentally disabled, is so wonderfully innocent and sweet that it will no doubt move you to tears.
7. Braveheart: This Mel Gibson hit movie offers the best of both cinematic worlds–it’s action-packed and has a beautiful love story woven in. The funeral scene in the beginning of the film, where the young William Wallace is handed a flower from the adorable Murron is enough to make any macho man shed a tear. Or seven.
6. The Notebook: Who hasn’t gone into convulsive sobs while watching this movie? Anyone? Anyone? I didn’t think so. Watching this masterpiece about an elderly man trying to help his dementia-stricken wife remember the story of their love, strengthened my belief in soulmates and miracles. If this movie doesn’t move you, I’m sure nothing else will.

5. Beaches: They say “opposites attract” in romantic love, but throughout my own life I’ve certainly found that this rings more true in my friendships than anything else. And watching the friendship between CC (Bette Midler) and Hillary (Barbara Hershey) blossom, and fade, and then grow stronger, gives me renewed faith in the power of friendships and encourages me to be a better friend.
4. Ghost: The movie that made pottery-making sexy again will always have a place in my heart. I can’t help but think of this movie–and the intense love between the two main characters, played by Demi Moore and Patrick Swayze, whenever I’m at a wedding and the classic Righteous Brother’s song, “Unchained Melody” is played.
3. Steel Magnolias: I hate it when people die in movies, especially when the character–in this case Julia Roberts as Shelby Eatenton Latcherie– is so charming and lovable. And, watching all of the other friends in this movie–a stellar line-up played by Dolly Parton, Sally Field, Olympia Dukakis, and Daryl Hannah–cope with Shelby’s upcoming marriage, and eventually death, makes me at times crack up laughing, and break down crying.
2. You’ve Got Mail: When this movie came out 15 years ago (Wow! Has it been that long!?) single, tech-savvy people everywhere started believing in love again. Today, with online dating on the rise, the thought that one’s soulmate could be found while answering an online dating ad, or by striking up a conversation with someone on a discussion board or in a chat room, always has the hope of a “You’ve Got Mail” ending behind it. Going to also include “Sleepless in Seattle” here too, for it’s beautiful ending.
1. Stepmom: In this ultimate tear-jerker, Susan Sarandon plays Jackie Harrison, a woman with terminal cancer, who must learn to get along with her ex-husband’s fiancé, Isabel (Julia Roberts) because she will eventually become stepmom to Jackie’s two children. Not only do we get to experience Jackie’s intense love for her kids–and the horrific pain of knowing she only has a short time left with them–but also her struggle to trust (and maybe even love) a woman who is so different from herself.
So what do you all think? What are your favorites?