‘I’m Not Blind, I Just Can’t See’: A Chat with the Blind Boys’ Ricky McKinnie 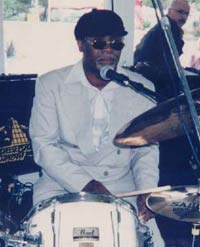 Ricky McKinnie has been playing with the gospel legends The Blind Boys of Alabama for more than three decades, and that makes him one of the new guys. First recorded in the 1940s, the Blind Boys were known mostly to traditional gospel audiences until the early ’80s, when they were cast in the Broadway show “The Gospel at Colonus.” Their wider exposure led to invitations to play with some of the biggest names in mainstream rock, including a tour with Tom Petty. The Blind Boys have returned the favor, covering songs by the Rolling Stones and, of course, Eric Clapton’s former group, Blind Faith.
For their latest collaboration, the Blind Boys teamed up with New Orleans mainstays like the Preservation Hall Jazz band and Alain Toussaint. We caught up with McKinnie at his home in Atlanta to talk about the album and its goals.

Let me start with the stupidest question first. Are all the Blind Boys blind?
No, four guys are not blind–our guitar players Jordan Williams, Tracy Pierce on bass, and Caleb Butler, and the road manager, Willy Chuck Shivers. But Jimmy Carter, Billy Bowers, Ben Moore, and me–I play drums–we’re blind.
The original Blind Boys started in the 1940s, when you were still young. How did you come into the group?
I had my own group out of Atlanta called the Ricky McKinnie Singers. Clarence called me about going over to Australia to play drums for the Blind Boys. That’s how it started.
Things have changed since then, for you and for gospel music. What was it like when you joined them?
In the beginning, we were singing in the black gospel circuit–auditoriums, civic centers, churches. Not a lot of TV or newspapers. The turning point was when we went to Broadway with the play “Gospel at Collonus.” Now we collaborate with artists from all different agendas, Tom Petty, Peter Gabriel. So a lot of different audiences have heard the Blind Boys now.
You sang with the Contemporary Christian band Jars of Clay. Why is it that mainstream listeners have an easier time accepting traditional gospel groups, but can’t listen to Christian rock?

Well, those groups have to do like we did, and go over and sing to those audiences. Because people really don’t know–a lot of times they don’t know what they like until they try it. It’s like going downtown and you might see a suit and you might not like that suit, but if you see it enough, your mind will change.
Has playing with the big rock acts changed or expanded your goals as a group?
No, see, because we believe in God. God said if I be lifted up, I draw all men. And that’s exactly what he’s doing. If you favor the more good things, he’ll make you master of even greater things. So, that’s what has happened as far as the Blind Boys are concerned. Our faith has brought us to where we are.
So when you’re working with someone like Petty, do you make sure the word of God gets out to his audience?
We don’t try to make anybody think one way or another. We’re just give them what we’ve got to give, and if they see something that will help them in their lives, that’s what makes a difference. People say, you guys are great and you’ve got all of this energy. They come to the show feeling sad, but they leave the show feeling glad. And that’s what it’s all about.
Your new album, “Down in New Orleans,” how did it come about?
Our producer, Chris Goldsmith, brought the idea to the Blind Boys. We thought, we can’t go down and help build a house or pave a street, we go can down to try and lift their spirits with our music. We had learned that working together works. People need people. So, that’s what this record is all about, letting people know that working together works and people need people.
Working with New Orleans mainstays like the Preservation Hall Jazz Band might not be as much of a stretch as Tom Petty, but it’s not traditional gospel. Was there an adaptation period?
Well, you know, they–the Blind Boys are from the Swing era, the era of Big Band, you know? Dixieland was just like going back home to them. When we got down to New Orleans, the band was already there, and they had gone over the music. So, we just went in, listened to what they were doing and cut the songs. We weren’t there about two or three days, and we just made it happen. We just laid it out.
Besides playing drums, you speak about disability.
Right. I try to let people know that a disability doesn’t have to be a handicap. A lot of people can’t see beyond the outer substance [of a disabled person]. They can’t see what’s on the inside. But it’s not what your eyes see, it’s the ability of the person that makes the difference. You know, back in the day, if you were black, you couldn’t get a job at certain places, Or if you were big, you couldn’t get a job at certain places. But, now, all that has changed. They learned that it’s not about the look, it’s about the ability.
There have been so many great blind musicians. Music seems to offer a way to rise above a disability.
Music has no barriers. When people hear music, they forget about their disability. And when you come to see the Blind Boys, people forget the fact that we can’t see. They don’t realize that I can’t see if they don’t see me when I get on the drums. When they find out that the Blind Boys have a sightless drummer, they can’t believe it, because my ability to play takes over that disability. My thing is, I’m not blind, I just can’t see.
One last question. Will you guys come sing “I’ll Fly Away” at my funeral?
Hey, you’ll be around for a long time.
I hope you will too.
read next post

The Apocalypse Comes to 'Terminator: The Sarah Connor Chronicles'
archives most recent
More from Beliefnet and our partners
previous posts