The Apocalypse Comes to ‘Terminator: The Sarah Connor Chronicles’ 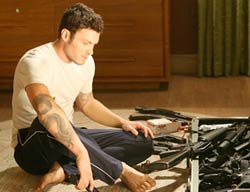 Last week’s episode of “Terminator: The Sarah Connor Chronicles,” got all apocalyptic. Well, not that it’s not already a show about a coming apocalypse, but “The Demon Hand” episode got explicitly Christian this time, evoking the Book of Revelation, and revealing that Detective Ellison–the man who is searching for Sarah, and beginning to believe her story about machines from the future who want to end the world–is a Christian.

Detective Ellison tracks down Sarah’s psychiatrist from when she was institutionalized–a man named Silberman who is retired from practicing and lives far out in a rural area. When Ellison begins questioning Silberman about Sarah Connor, Silberman freaks, knocks Ellison out, and when he wakes, Ellison finds himself prisoner to Silberman. Turns out, Silberman now believes Sarah Connor’s every word–so much so that he’s prepared for the apocalypse–and thinks that Ellison might be one of the machines from the future.
Silberman asks Ellison: “Are you a man of The Book?”
Ellison says yes–but we don’t know, at this point, if he says yes because he is a prisoner or because he really is a “man of The Book.”
Enter Silberman’s babbling about Revelations, etc….
Despite a rather rough time of it, at the hands of Silberman, by the end of last week’s episode, we see Ellison participating in a bible study group. Is it because he was already Christian? Or because somehow, between Sarah and Silberman, he’s been “converted” on a number of levels?
This is the first time “Terminator: The Sarah Connor Chronicles” has gotten explicitly religious.

read next post
Can Oprah Save Reality TV from Itself?
archives most recent
More from Beliefnet and our partners
previous posts