The Miracles of Hanukkah – an interview with David Adler 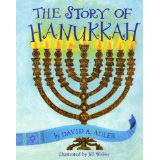 There are a lot of Hanukkah picture books (and no, not all of them were written by Eric Kimmel.) But there actually aren’t a lot of books for young children that tell the story of Hanukkah – the narrative of the Maccabees’ defeat of Antiochus. Granted, it’s a fairly grizzly story, with its fair share of bloodshed, but that’s part and parcel of many Jewish holidays. (Someone tried to kill us, we won, let’s eat.) For those of us who want to explain the reason for the candles and the oil and the gifts (well, not really the gifts), it’s helpful to have a concise and well written version of the story. In the past, I’ve relied on Amy Ehrlich’s The Story of Hanukkah, which has beautiful illustrations, but the language is a little complex for younger elementary age students, and it’s out of print. I’ve also used A Great Miracle Happened There, by Karla Kusking, but it’s reaaalllllly looooonnnng. And, also out of print.

I was really happy to receive David Adler’s new book from Holiday House, also aptly titled The Story of Hanukkah. It’s simply told, with clear language and only a few small references to people being, well, slaughtered (which I suppose you could skip or edit if you were so inclined.) If focuses primarily on the struggle for religious freedom, with only a few sentences devoted to the story of the oil, which I also liked a lot.  I’m not crazy about the illustrations, but they are colorful and definitely kept my kidnergarteners attention.

I had a chance to interview David Adler last week, and I told him that one of my favorite parts of the book is his reference to the “miracles” of Hanukkah. It’s the only time the word is used in the entire text, and I appreciated both that he used the plural, and that he never specifies what the miracles are. It’s a perfect opportunity for an open ended discussion with your child or children about just what miracles and are, about what about this particular story might be considered miraculous. (Alas, when I asked my kindergarten students, the first child who raised his hand explained that a miracle is “someone telling a lie.”)

I asked David about his framing of the Hanukkah miracles. He talked about the typical emphasis in Hanukkah stories on the oil, and why he chose a different focus, leaving it up to the reader to consider what makes something miraculous. “The story highlights that a few beat many. Is that miracle or not? A miracle is something that goes against nature. A few against the many is against nature – maybe not so much as the oil – but you still shouldn’t dismiss these things. If the oil didn’t burn for 8 days, the Maccabees still would have recaptured the Temple . But if the Maccabees hadn’t won, well….think about it. Which miracle would you have chosen?” Indeed. (Of course, no one is interested in eating potatoes and jelly doughnuts fried in Maccabees, so I’m grateful for the oil part of the story as well.)

The Story of Hanukkah is a perfect story to read on the first night of the holiday, or even before, to help explain to your children what the holiday is all about. I’ll be blogging later this week with more book recommendations, maybe even in time for your Hanukkah shopping list.

What do George Carlin, Evangelical Christians and this Jewish mother have in common?
archives most recent
More from Beliefnet and our partners
previous posts