My favorite performance of “rock night” was Josh Krajcik. Not only was he good, he sang a rock song.

Tonight’s X Factor results show offered up a surprise early on as the field was whittled down from 10 to 9 contestants: Lakoda Rayne wasn’t in the bottom two. And it got more crazy as the night went on.

Usually we have to sit through about 48 minutes of crap to get the resuls, which are then rushed. The contestants performed “We Will Rock You”, and then host Steve Jones put a spin on the results by announcing just a few minutes into the show that LeRoy Bell and Lakoda Rayne were moving on to the next round. That meant that one of the other judges would be sending home one of their contestants.

Had Lakoda Rayne gone home, that would have put all of Paula’s contestants out of the competition, so it’s nice that Steve Jones gave her that relief early.

Then we had a mini Sony promotion, as the contestants has a photo shoot and got new cameras. After that, another promo as Rihanna performed her latest single, “We Found Love.” I had no clue what she was singing; all I saw was flashing lights and a lot of jumping around. I’m sure it’s a nifty song in the dance club but the lights, the dancers, it was all overload … well, now I’m just griping like an old lady, aren’t I? …

Before the next break, Steve Jones put four more contestants out of the misery, as he announced that Chris Rene, Melanie Amaro, Josh Krajcik and Marcus Canty were moving on.

Drew and Rachel are on the verge of tears, and Stacy Francis is stunned; Astro seems fine as he waits. Steve Jones announces that Drew is through; Rachel is tearing up, and then he announces that she’s through – leaving Stacy and Astro as the bottom two acts.

What?? Stacy, I can see; she’s struggling. I expected Marcus or Lakoda Rayne to be in the bottom.  Or may be even Drew; she’s so good and I love her, but last night was boring. But Astro?  Judge for yourself; here are videos from Stacy and Astro’s performances from last night:

Actually, I don’t see Astro’s video … maybe I can track it down … although just watching Stacy’s performance it’s kind of clear why she’s in the bottom two.

Anyway, Stacy can’t even talk when Steve asks her how she’s feeling; Astro, on the other hand, tells the audience that it’s all good, that hip hop made it this far, no worries.

I feel badly for Stacy; she’s so talented and really deserves a chance to go to the end, but I don’t think Nicole has been doing her any favors as her mentor. For her last chance song, she sings “Amazing Grace”; she sounds off key again tonight. Poor Stacy.

Astro comes out and says he doesn’t think he should perform but asks the audience and LA if he should … not sure if it’s part of the act or not. But he does “Never Can Say Goodbye” with his signature rap about the show and judges and his X Factor experience.

When it’s time for the judges to make their choice, LA calls Astro out on his attitude – guess it wasn’t part of the act. He really is being a brat. LA tells him he acted like a quitter “and it upsets me.”, calling him on his lackluster performance. But in the end, he sends Stacy home.

Nicole says she has admiration for both, but sticks with her girl and votes to send Astro home.

Paula says she respects them both and their performances tonight keep them in the same boat, for her. But she comments that they both need to have an attitude of gratitude, telling them, “It’s not how you start but how you finish.” She sends Stacy home.

That leaves Simon in the deciding position again. Vote for Stacy, she goes home. Vote for Astro, they go to the deadlock, and the contestant that got the actual least number of audience votes goes home. But Simon wants Astro to know that he doesn’t like his attitude. To which Astro replies, “If you’re gonna put me in the bottom two I don’t want to perform for people who don’t want me here.” For a moment, it looks like Simon might vote for Astro – the crowd is most definitely not interested in keeping him; they’re booing for Astro, cheering for Stacy. But in the end Simon picks Stacy to go home.

When the show started tonight, I would have picked Stacy as well, just because she’s been struggling so much. But after watching Astro cop that bratty attitude, he proved what the judges have concerned with all along: He’s too young for this kind of pressure. At this point, they should have let him go and given Stacy the chance to continue to grow. Not that her goodbye thank you was all that sentimental, but you can see that she’s battling thankfulness for being there with the harsh reality that she’s done. I can’t imagine that’s easy for someone who has worked so hard and at least she tried.

So that was the twist on tonight’s X Factor. What do you think – should Astro have been sent home? Or did the judges get it right? 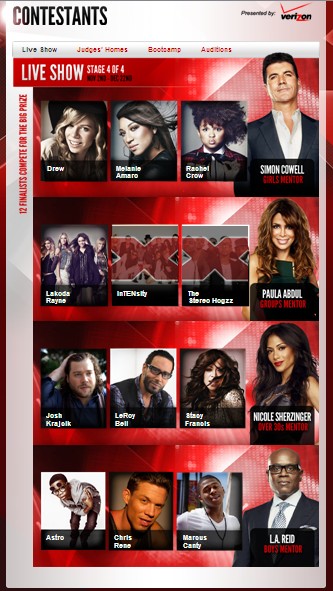