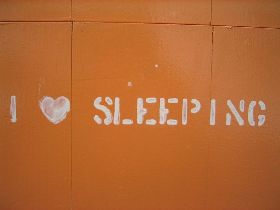 “What would you do if you knew that every good thing in your life depended on your getting enough rest? Because it does.”
– Martha Beck, “Steering by Starlight”

Last winter I was sick pretty much from December to April, felled by one cold/flu brew after another. I’m still not exactly sure why–I usually escape with two colds a year. But I was a) Nursing a bruised heart and b) Getting up really early to practice yoga–and cutting my sleep by about two hours a night to do so. The former equals lots of stress, which we know can impair immunity, and the latter, according to another new study, also gives our white blood cells a run for their… plasma?

A post on the New York Times’ Well blog summarized the latest large-scale sleep/immunity study like this:

“In a recent study for The Archives of Internal Medicine, scientists followed 153 men and women for two weeks, keeping track of their quality and duration of sleep. Then, during a five-day period, they quarantined the subjects and exposed them to cold viruses. Those who slept an average of fewer than seven hours a night, it turned out, were three times as likely to get sick as those who averaged at least eight hours.”

Three times more likely? That makes total sense, but, yikes. I was definitley getting six to seven hours. And, all of this is coming now because, having just re-booted my morning yoga program, I’m getting sick again! Save me Dr. Schulze’s Super Tonic!

I guess I didn’t quite correlate this before–studies show sleep can also affect cognition (har). But now I’m renewing my commitment to getting those eight hours. Which, frankly, should not be such a hardship. I’ve got no family to tend, wild parties to go to, and I’m pretty sure JCrew.com will be cool if I lay off the purchaseless shopping for a while.

Oy, though, this seems to happen so often in our stressy world–in an effort to get healthier, we do one nice thing for ourselves only to upset our overall health balance. Cook at home more, sleep less. Sleep more, exercise less. Do you find this? How do you balance sleep and exercise and eating well? I’ll put your tips together in a handy post for us all. Thanks!

Why Salt Water Gargling Is Good for Your Throat

Scenes From a Headcold

Be Well with Handwashing