How to Really Say ‘Sorry’ 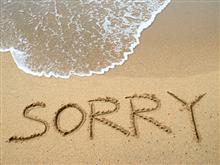 We just posted a gallery by Ariane De Bonvoisin called “How to Really Say ‘Sorry.’” I comissioned the piece because it’s something so many of us struggle with. Sometimes it’s hard to apologize because we don’t feel like we’ve done anything wrong. Other times it’s hard because we have to actually face feelings of shame and regret. It’s plain old scary so much of the time–even if we truly didn’t do anything “wrong,” it sucks when someone is hurt by your words or actions.

Apologizing well is not only about the mechanics of good communication (though it involves plenty of that), it’s about growing up. Taking full responsibility for our mistakes, stepping out of the victim role that we can slip into so easily when someone else is upset with us or when we are upset with ourselves, is tough, mature, advanced-human stuff.

It’s also a big deal to learn not to misuse apologies–either over-apologizing for our very existence, or apologizing only semi-sincerely to get an apology ourselves (like, saying “I’m sorry I raised my voice” in the hopes that the other person will say, “No, I’m sorry I raised MY voice”).

And one of the number one apology-killer? The “I’m sorry, but….” As everyone who has ever received an “I’m sorry I was late but…” knows, it’s incredibly unsatisfying. If someone is late, I just want an apology, pure and simple. Then I can feel respected, acknowledged, and honored for my time and presence. Then my heart can release enough to receive fully whatever that “but” is–the rain, the traffic, a last-minute meeting. And give the other person compassion much more easily than first having to struggle with my own feelings of being disrespected. IMHO, so many of the world’s tensions–between couples, parents and kids, nations–could be resolved if people would simply pause between the apology and the explanation. If we could say the “I’m sorry,” let it sink in with no expectation or attachment to being forgiven or understood. And then, maybe 30 seconds later, or five minutes later, give the reason. This isn’t true in more grave breeches of trust, but in terms of avoiding cumulative resentment build-up? Golden. (And I’m fully aware that someone I’m close to will email this to me one day after I give a defensive “I’m sorry but”!)

K, without further ado, here’s the gallery: How to Really Say ‘Sorry.’

And after you read that you can talk about it here:

When Was the Last Time You Said You’re Sorry (and Really Meant It)?

Fresh Morning: Meditation for Morning
archives most recent
More from Beliefnet and our partners
previous posts