What Does ‘Om’ Mean? 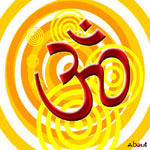 “…Whosoever knows this syllable obtains all that
he desires. This is the best support; this is the highest support. Whosoever
knows this support is adored in the world of Brahma.”
~ Katha Upanishad I

If you’ve ever been to a yoga class chances are you’ve let an “om” rip. Many teachers bracket their sessions with this sacred, ancient Hindu mantra. There are so many definitions and meanings out there, but my very basic understanding is that it is the sound of the Universe. It is the merging of everything into one. I’ve had experiences of deep meditation when I’ve actually heard this sound–a kind of buzz, a hum of energy vibration. (Or maybe it was just a lawnmower, who knows, but it was cool nonetheless.)

This About.com article on “om” does a better job of it, explaining how “om” is actually made up of three syllables: “It is made up of three Sanskrit
letters, aa, au and ma which, when combined together, make the sound Aum or
Om. It is believed to be the basic sound of the world and to contain all other
sounds.” Though I’ve also heard that disputed–some yogis say om is just om. Others say that each syllable represents a deity, comprising the holy Hindu trinity that equals God.

Like so much of yoga, the symbol has been wildly appropriated by the West. Not that there’s anything wrong with that, even though bumperstickers like “There’s no place like Om” seem to be a tad disrespectful of om’s power. One appropriation that I do like is when it’s chanted in class. It doesn’t matter if we know what it means or not, it’s a moment when all these people, usually strangers, join their voices together in harmony. It’s a brief communal moment when we’re all acknowledging the “it”–the divine, the thing we’re all trying to get. It’s like a tiny taste of enlightenment.

And I love to note the difference between the first pre-asana om and the last. In the final om it seems like no matter where I’m practicing, the sound comes out clearer, from deeper with each of us, and we are more in tune with each other. It’s always a tangible (audible?) sign to me that something has happened in that class, even if we can’t feel it, something within us and between us has shifted for the better.

Do you ever chant om? What does it do for you?

Fresh Morning: The First Thing
archives most recent
More from Beliefnet and our partners
previous posts