Our summer of frothy fiction continues with Wicked Lovely, the first in a YA series about faeries and the high school girls who . . . don’t quite love them. The trivia:

Age group: Suitable for 14 and up

Other books I’ve read by this author: None

How I found the book: The recommendation of a fellow middle-aged author who quietly indulges in YA. (Her secret is safe with me. See, I’m not even linking to her author website.)

Especially recommended for: Fans of Twilight who enjoy romance but would like to see a strong female character who is not afraid to say no to a guy just because he is gorgeous, immortal, and has superpowers

Out of 25 musicians on the book’s now-obligatory playlist, number I actually recognized: 2 (Bono and Nine Inch Nails)

Aislinn has a serious problem: She can see faeries, and they don’t want to be seen. Unlike the sweet fairies of Disney movies, the fey in Melissa Marr’s gritty YA novel Wicked Lovely are selfish and sometimes even deadly. Ash has been taught all of her life not to let on that she can see the faeries. To escape them, she often retreats to the sanctuary of her friend Seth’s trailer — which, because it is made of a lot of iron, repels the fey. 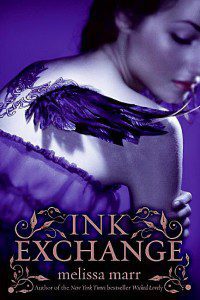 Aislinn’s problem comes to a crisis when a faery prince named Keenan takes an unexpected and serious interest in her. Ash discovers that her unusual powers are not just limited to seeing faeries, but that she may have a significant role to play in the faery world. And of course, since it is adolescence, the fate of the entire world rests on her decision about whether she wants to accept the “gift” of immortality or strive for a normal human life.

The Washington Post called this novel an “enticing fantasy” that makes a contribution to the “Urban Faery Sub-genre.” (Seriously? That’s a genre now? I guess the fey, like many folks today, didn’t find enough stimulation or opportunity in rural areas and forests.) Like the Post reviewer, I enjoyed the story very much, enough that I recently downloaded the second novel, Ink Exchange, to my Kindle.