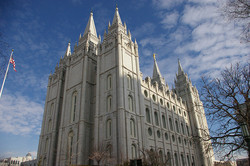 I had been a Latter-day Saint for many years before I first heard about the LDS temple ritual of baptism for healing.  I was fascinated. Kudos to guest blogger Jonathan Stapley and his fellow researcher Kris Wright, who have recovered many accounts of this practice, which was part of Mormonism until the 1920s, and are now publishing their research. This is history I read with a sigh for what has been lost to us, and what might have been.  –JKR

SHORTLY AFTER HER HUSBAND returned home from a British mission in 1890, thirty-six-year-old Eleanor Cannon Woodbury Jarvis entered the St. George Temple font. This mother of eight sought a miracle. She remembered: “In the spring of 1884 my health failed and I had very poor health for the next 17 or 18 years. I was very near deaths door several times, but by the power of Faith my life was spared. . . . I was taken to the Temple in a wheel chair, was carried into the Font, baptized for my health & walked out & dressed myself, the first time for six months.”

So opens the paper that Kris Wright and I wrote on the history of Baptism for Health, a healing ritual that was common among Latter-day Saints from 1841 to 1922.

I think I first came across the idea of baptism for heath when reading a compilation of First Presidency letters. It was the letter that ended the practice. For someone whose ideas about healing ritual were decidedly modern, it was thrilling to find that Latter-day Saints were baptizing people to heal them, and in the temples no less! We don’t do anything like that today. All sorts of questions arose and I started looking specifically for accounts of ritual practice. Once I started looking, the accounts seemed to be everywhere. Joseph Smith baptized several for their health. Temples kept regular records for how many baptisms for health they performed.

After starting to work with Kris Wright, a fellow researcher, we decided that our first project would be a paper to present at the Mormon History Association annual meeting in which we compared the development of baptism for health and female ritual healing. After that, we decided that a history of baptism for health would be our first paper to submit for publication.

You can read the whole paper here. What we found and documented more explicitly in our second paper, was that Latter-day Saints transformed their salvific rituals into healing rituals. The earliest revelations to Joseph Smith instructed the Elders to lay hands on the sick, which they did. They often prayed with the sick and then laid hands on the afflicted regions of the body as well as the head. Once the Kirtland temple liturgy was available to the body of the saints, anointing the sick became common and shared the pattern from the temple: anoint with oil, seal blessings. Mormons adapted the Nauvoo temple rites to heal the sick as well.

It was there, on the bend in the Mississippi, that Joseph Smith taught that the temple was to be a special place for healing and declared that the temple font–the first font of the restoration–was a place where the Saints could be healed through baptism. As soon as the font was ready in 1841, the Quorum of the Twelve started baptizing the sick to heal them. The font had some problems, however, and until they could be fixed, baptisms for the dead and the sick were moved to the river. It was in the river that Joseph Smith baptized Emma for her health. After that time, Latter-day Saints baptized for health wherever they found themselves: England, Tahiti, on transatlantic vessels, on the trail West, in Utah and in the temples.

The end of baptism for health is important in that it highlights a major era of liturgical transformation and modernization. After the pioneers had passed away, Church leaders began questioning practices that tradition dictated to be normative. Early Mormons did not write formal liturgical guidelines, preferring to teach each other how to administer rituals by example. Teachings regarding baptism for health were never canonized. In 1920, President Heber J. Grant began a process to codify church liturgy and baptism for health did not make the cut.

So closes the paper Kris and I wrote on this topic:

Although not part of modern LDS praxis, baptism for healing is an integral feature of Mormon history and played an important role in the development of the modern Church’s rituals and conceptualizations of healing. It was born of Mormonism’s charismatic restoration, received Joseph Smith’s revelatory support, and was promoted by generations of Church leaders. Although it was ultimately eliminated from the lexicon of the faithful, it provides an illuminating window through which historians can view the health, life, and death of Mormon men and women.

Jonathan Stapley received
his doctorate in carbohydrate chemistry from Purdue University, and he currently works with a firm that
is industrializing his graduate research.  Dr. Stapley is also a
independent historian and is currently serving on the editorial board of the Journal
of Mormon History.

The Good, the Bad, the Ugly: This Week in the Twible, 2 Chronicles 20-26
archives most recent
More from Beliefnet and our partners
previous posts