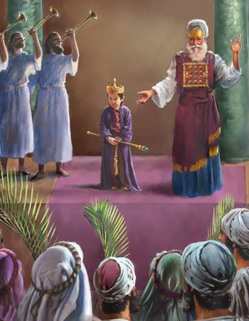 In doing research for the Twible I recently came across this chart of the kings and queens of the Old Testament/Hebrew Bible. Is it just me, or is this chart bending over backwards to give these rulers the benefit of the doubt?

Joash is listed as “good mostly” (which I assume means “mostly good”), but this is the king who put the prophet Zechariah to death just because Zech said the Lord had forsaken Joash because of apostasy and somesuch. Joash didn’t take kindly to criticism.

What’s especially interesting about this is the back story. Joash was the sole surviving member of his family of origin; his granny Athaliah had gone totally nuts when he was a baby and killed all the members of his family so there would be no rivals to the throne. Somehow she missed the fact that Joash was still alive. He had been spirited away to the temple, where he spent six years of his childhood in hiding. Ah, good times.

When Joash was seven, his dad’s former chief priest, Jehoida, staged a bloody coup of the sort that make the Bible unteachable in Sunday School, and had Grandma Athaliah executed. Joash became a boy-king under the wise guidance of Jehoida, who saw that he prospered into adulthood and fetched him a wife or two.

Joash did some good things as king, especially fixing up the temple, but he soon fell into pride and disbelief in that familiar biblical pattern. But that’s what prophets are for, right? So Zechariah was just doing his job when he called Joash to task and got a stone to the head for his troubles.

The key in all of this is that Zechariah was the son of Jehoida, the same high priest who had saved Joash’s life, overthrown the Wicked Witch of the East, and set him up in the Emerald City. The Chronicler moralizes that “King Joash did not remember the kindness that Jehoida, Zechariah’s father, had shown him, but killed his son.”

So it’s generous of the timeline to put Joash in the “mostly good” column. I will try to emulate that compassion and remember that the guy would have been seriously PTSD after Grandma wiped out the rest of his family. (But why, then, would you in turn annihilate a key member of your surrogate family?)

Bible folks are complicated, and so are we.

#Twible 2 Chron 20: Just when you think it’s safe to retire
in peace, your enemies join up to attack from the East. It’s always something.

#Twible 2 Chron 21: Jeho kills 6 brothers to secure throne,
but G can’t ice him b/c of pesky covenant. Gives him IBS x10 though. So there.

#Twible 2 Chron 22: Remember in the 10 Comm’s when G said to
obey Mom? Well, ignore that in this case. Ahaziah’s ma is way, way wicked.

#Twible 2 Chron 25: Amaziah, if the Edomites’ gods were so
puny that you crushed them in battle, why would you then worship …? Sucker.

The Best New Intro to World Religions: Stephen Prothero's "God Is Not One"
archives most recent
More from Beliefnet and our partners
previous posts