Bonhoeffer for Today: A Q&A with Biographer Eric Metaxas 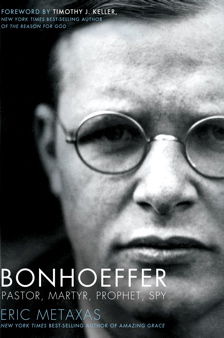 Eric, when Thomas Nelson sent me your book, I thought there must be two or three books in the package, it was so thick. Then I opened it to find a single doorstopper. Wow! How long did it take to research and write this biography?

Yes, it’s a big book, much longer than the one I thought I would write. But I’m extremely happy to report that a huge number of people all have said they were initially daunted by its size, but once they started it they just couldn’t put it down. Publishers Weekly even called it “riveting”! It’s in extremely bad taste for an author to quote his own reviews, but when you’ve written a long book, it means everything that so many people are really enjoying it. The previous big biography, by Eberhard Bethge, is actually twice as long and weighs five pounds, so compared to that, my book is a dime-store paperback… I wanted my book to be definitive, but also accessible, and I hope I’ve succeeded in both of those things.

I wrote it during a period of the most concentrated effort I’ve ever made in my life. It was as if I were sprinting a marathon and praying that God would give me the strength not to collapse. He did; so I didn’t.

Why did you want to write a life story of Dietrich Bonhoeffer, the first major biography to be published in 40 years? How does his life speak to you?

I first heard the story of Bonhoeffer in 1988 and was simply staggered. The idea that a devout Christian in Germany would stand up to Hitler and get involved in the plot to kill Hitler and be killed in a concentration camp was just amazing. My mother grew up in Germany during those awful years and my grandfather was killed in the war (I dedicate the book to him), so that period of history has always haunted me. Still, I never thought I would write a biography on Bonhoeffer. But after the success of Amazing Grace, my biography of Wilberforce, everyone kept asking whom I would write about next. There’s only one person whose life captivates me as much as Wilberforce’s life did, and that man is Dietrich Bonhoeffer. He’s about as authentic a person as I’ve ever encountered and I know that his life speaks powerfully to us in a number of ways. He’s sort of the ultimate hero and his story is so inspiring I just had to tell it to a new generation of readers.

One of the coolest things about your biography is that you’re drawing on letters and journal entries that have never been published before. What were some of these, and what do they add to the story you’re telling?

There is an extraordinary 16-volume series of Bonhoeffer’s works published by Augsburg Fortress Press. It contains every letter and journal entry and everything else he ever wrote and most of the volumes have finally been translated into English, so I had access to everything. It is an absolute treasure and as I was reading through it all I found things that were especially interesting or humorous or entertaining or revealing and I thought, “I have to put this in the book.” So there’s a very wide range of things in my book, including some of Bonhoeffer’s poetry. I think that by reading his letters to friends and family, and by reading his journal entries, you get a very different view of him than you get from just reading his books of theology. It humanizes him tremendously and shows you what kind of a person he was. He comes across as accessible and charming and gracious, the sort of person one would love to spend time with. This is a quite different portrait than one might have of him just from reading his books.

Your subtitle suggests you’ll be looking at four different aspects of Bonhoeffer the man: pastor, martyr, prophet, and spy. Christians are probably used to the first three, but what do most people know about Bonhoeffer as a spy for the Resistance?

In 1939, after Hitler declared war on Poland, and after Bonhoeffer returned from his fateful and abbreviated trip to the U.S., he was asking God what to do next. And what he ended up doing was working for German military intelligence — called the Abwehr — under the supervision of his brother-in-law, Hans von Dohnanyi. But of course Dohnanyi and many others in the Abwehr were involved in the conspiracy against Hitler. That’s why Bonhoeffer joined them! So he became a double agent. On the surface he was working for the Abwehr, but in reality he was working to make contacts with the Allies, to let them know there were Germans inside Germany who were working to overthrow the Third Reich. It’s just amazing.

Your book also delves into the love story between Bonhoeffer and his much younger fiancée, Maria von Wedemeyer. They come across as very different people. How did they come to fall in love?

I don’t want to spoil it, because that’s one of the best parts of the book, but the bottom line is 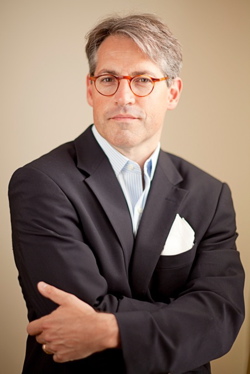 that it came quite out of the blue. Bonhoeffer was visiting Maria’s grandmother, who was a very dear friend of his, and Maria just sort of showed up and they spent an evening talking together. Bonhoeffer was as surprised as anyone by his feelings. He was sure at this point in his life that he would never get married.

This is a warts-and-all biography, a balanced portrait of a great man who was under terrible stress in an unjust war. What were some of Bonhoeffer’s flaws, and how did they manifest themselves during his life?

Bonhoeffer was extremely bright and self-disciplined, so he could sometimes be very critical and demanding and could lose his temper with people. He writes about this in a letter to his best friend, Bethge, apologizing for it. Some people also thought of him as aloof, as having a bit of distance between himself and others. He was a terribly complex individual, but seems to have been extremely self-aware and conscious of his faults, and always trying to remedy them. I suppose if one is desperate to find a worm in the apple one might always cite the fact that he was a smoker.

Bonhoeffer has enjoyed a huge surge in popularity recently. Why do you think his writings are so appealing to people today?

There’s something about Bonhoeffer that just seems extremely modern, as though his whole life and writings were written for us, today. He died young, so he will always be young and will always hold a certain freshness and appeal to young people. But there’s something about his extraordinary authenticity that especially speaks to us today with particular force. He saw right through dead religion and spent his whole adult life trying to show the difference between dead religion and a real and personal faith in Jesus Christ. His unwillingness to abide cant and sloganeering and theological or philosophical chicanery seems particularly appealing to us today, who have had our fill of these things and who long for someone to give us an alternative to them.

After your biographies of Bonhoeffer and William Wilberforce, what’s next for you? Do you have any future books planned?

I’m not sure exactly what I’m going to write next. But this much I do know: it will be very, very short.

Why Do the Amish Love Mexican Food? And Other Amish Trivia
archives most recent
More from Beliefnet and our partners
previous posts