Why Do the Amish Love Mexican Food? And Other Amish Trivia 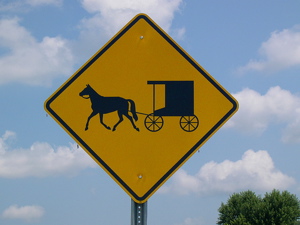 We’ve been way too serious here at Flunking Sainthood lately. And since no one knows how to have fun quite like the Amish, let’s spend some time with them.

I have an enduring love affair with the Amish that started when I was in eighth grade and did a report on them for my social studies class. I still read all the Amish-related non-fiction books I can get my hands on (highly recommended: Rumspringa by Tom Shachtman), though I draw the line at reading bonnet fiction. It’s just not my thing.

It’s worth asking why people are so fascinated by the Amish. For many people I think it’s a combination of desiring a slower life and wishing to return to the land. I, on the other hand, vastly prefer the life I already have. For me, Amish envy is all about the food. 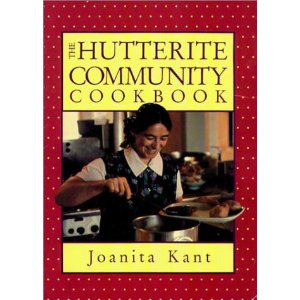 I’ve discovered that you can learn a ton about a religious group by scouring its cookbooks. I have a well-worn copy of The Hutterite Community Cookbook that has taught me an important fact about this communitarian Western cousin to the Amish: these people love their sugar. The first five chapters are for things like sweet breads, cookies, desserts, pies, and jellies. You’re two-thirds of the way through the book before you learn that things like meats and main dishes even exist in the world. It’s a grand way to live.

I’m also a fan of The Amish Cook, aka Lovina Eicher.

Her mom started a syndicated column about twenty years ago that was picked up in newspapers around the country, describing Amish family life and offering delicious recipes for cooking at home. When the mom died of a heart attack (which had nothing whatsoever to do with the abundant cream, butter, or sugar in said recipes), Lovina took over and has done a bang-up job with the column, which she still writes by hand and mails to her editor each week the old-fashioned way. 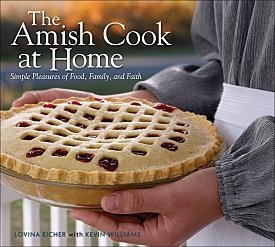 Recently the book The Amish Cook at Home has carried on the tradition. Arranged by season, the book focuses a fair amount on home canning and preserving vegetables and fruits. I don’t see myself pickling beets anytime soon, but I did learn some things about the Amish that I didn’t know. Here are some pieces of trivia:

1. Amish love Mexican food. According to The Amish Cook, this is because many Amish went to Mexico over a century ago, lured by promises of large tracts of land and freedom from the military draft. They incorporated tortillas and salsa into some of their regular recipes. Who knew? Another, more recent, reason for the connection is health care: since the Amish don’t have medical insurance, many have been flocking south of the border for major procedures like hip replacements, and they eat like locals when they’re there.

2. Amish can ride in cars, trains, buses, ships, and subways, but not in planes. Why not planes? I don’t know, and the book does not explain. Tell me if you know.

3. There is a good deal of variation among Amish communities. Some don’t practice shunning. Some are so conservative that they don’t even want to put reflectors on their buggies (!). Some practice rumspringa, and many don’t.

4. The Amish are coming soon to a community near you. The great trend of the last fifty years has been for the Amish to move away from hubs like Lancaster County. With large families, there’s not nearly enough land to go around, which explains another major trend: more and more Amish working outside the home in RV factories, woodworking shops, and cabinet companies throughout the Midwest.

Every Member an E-Missionary: The Updated Mormon.Org Site
archives most recent
More from Beliefnet and our partners
previous posts